This is Ray too: 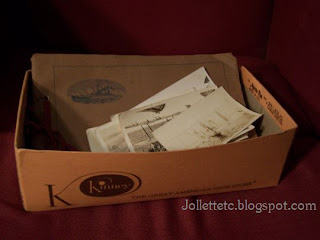 This shoebox filled with pictures, postcards, and souvenirs from tours in the Navy is what Ray left behind when he took his own life in his mother’s shed in 1927.  His mother kept this box as did my grandmother and my mother.  Now I have this mini-memorial that is more mystery than gift.  Faces and events mean nothing.

Ray did not marry.  He had no children.  No one will be excited to see these pictures.  No one is searching for him in old census records.  Therefore, I feel compelled to remember Ray Rucker.  If I don’t, who will?

I don’t have any expertise at reconstructing history from clues in old photos, and my knowledge of naval warfare is limited, but I have learned something of Ray’s life in the Navy from the photos and occasional note on the back, and a little Googling.

Ray most likely began his Navy career on the USS Swallow,
a minesweeper whose dangerous duty was to remove mines
placed by the enemy to prevent ships from passing.

In addition to a pay receipt dated 1922, he has this next picture. 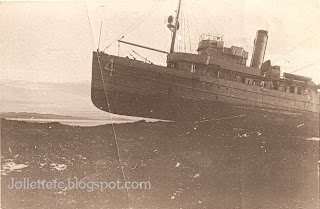 On the back he wrote:  U.S.S. Swallow Ship wrecked and dashed high and dry on the rocks near Ketchikan Alaska Sept 12 – 1920.

Ray later served on the USS Colorado, a recently commissioned Maryland class super dreadnought, in other words a big-gun battleship.  He must have been among the first crewmen. 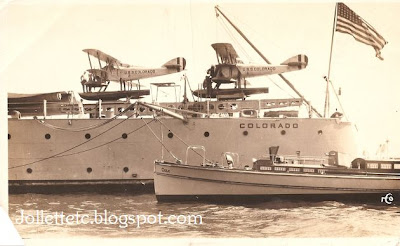 The ship carried Corsair float planes on catapult rails, two on the after deck and one on top of the gun turret.

The Corsair float planes were used for reconnaissance and to adjust fire for the ship’s big guns.  (Were you wondering if I would ever connect to the theme?)  Of course, Ray did not live to see the Colorado and the Corsair aircraft in their mission to find Amelia Earhart.


Top left: Ray is on the back row, far right
Bottom right:  Ray is the first guy, front row

Ray’s collection of pictures matches the history of the USS Colorado’s calibration trials in the Atlantic in 1924 followed by a trip through the Panama Canal to join the Pacific Battle Fleet.


The following year, Ray was on the Colorado when it sailed to Australia and New Zealand.

Sometime during that tour they stopped in the Samoan Islands.  What a treasure is this picture of Ray with a Samoan native. 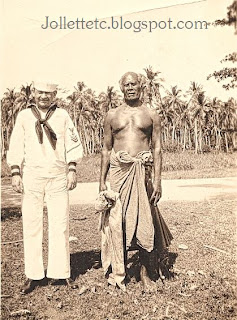 Stretch your wings and fly over to Sepia Saturday to read other flights of fancy.

Email ThisBlogThis!Share to TwitterShare to FacebookShare to Pinterest
Labels: Rucker