This week’s Sepia Saturday prompt pays tribute to ties and suspenders.  If my ancestors wore suspenders, they didn't put them on display.  But there were ties a-plenty in the photos passed down to me. 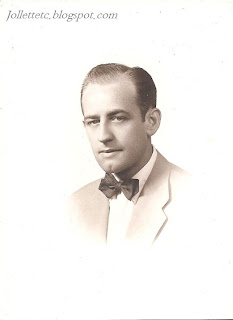 
Handsome gentleman callers weren’t the only ones sporting ties.  Ties were a common accessory among college girls too, if my great aunt’s scrapbook can be trusted.

Please visit my friends at Sepia Saturday, if you’re not already TIEd up. 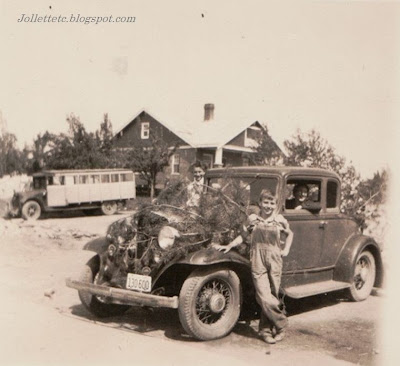 What’s up with all the greenery on the hood of the car?  Everyone seems too jolly to have just plowed through a tree, so the make-shift camouflage must be intentional.

Sepia Saturday: Before It Was Unlawful

They are pictured here waiting to board the canal boat. 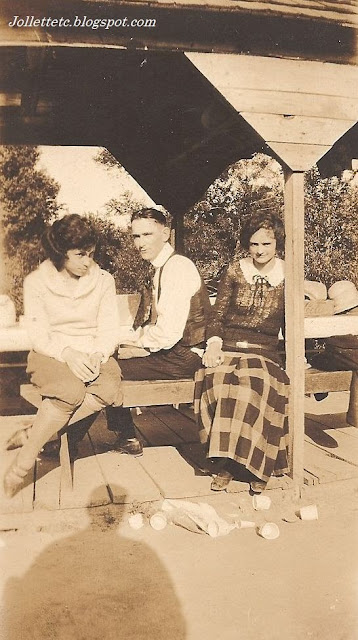 Even though those knickers are quite eye-catching and that plaid skirt positively jaw-dropping, my attention goes to the ground.  Litter.  Shame.  Shame.  Triple Shame.

It would be another 30 years before the Keep America Beautiful campaign challenged us to “beautify America” by reminding us that “Every litter bit hurts.”

Please visit Sepia Saturday to see what threesomes others have to offer. 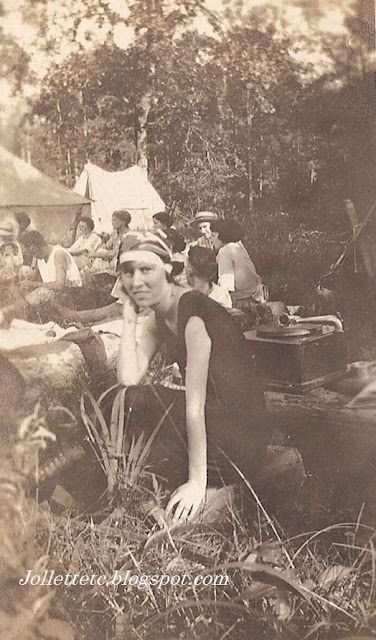 This photo of my great-aunt Helen Killeen Parker was taken probably between 1919 and 1921.  Notice the gramophone which must have provided some fun background music for a camping trip.  In my day, it would have been a transistor radio.  My daughters when in high school would have relied on their “boom box.”  Today, a simple iPod that fits in a pocket can hold 1000s of songs, more than anyone could listen to on a weekend camping trip.

This week’s Sepia Saturday prompt is a group of women in hats enjoying a picnic.  Dining in the great outdoors was a long-standing tradition among the Jolletts when they all gathered in Harriston, Virginia for the annual reunion.

I don’t know when the reunions began or exactly when they stopped, but photos of the event are dated as early as 1919.

Besides catching up on the latest news, the Jollett family seemed to have adopted 3 traditions:

EAT – look at that spread!  Blue mason jars filled with peaches, applesauce, pickles.  Freshly baked cakes and pies and rolls.  I wonder what else. 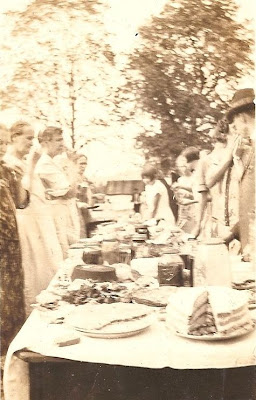 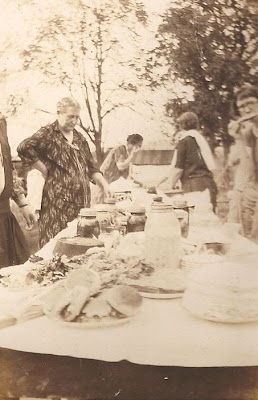 PRAY – Who was the heathen snapping photos during the prayer?

LOVE – The reunion was a time to get that 4-generation photo.

I remember seeing a picture of my mother as a baby sitting on her great-grandfather’s lap at the reunion of 1929.  Unfortunately that picture has gone missing, and I really hate that.

Grab your hat and join the picnic at Sepia Saturday. 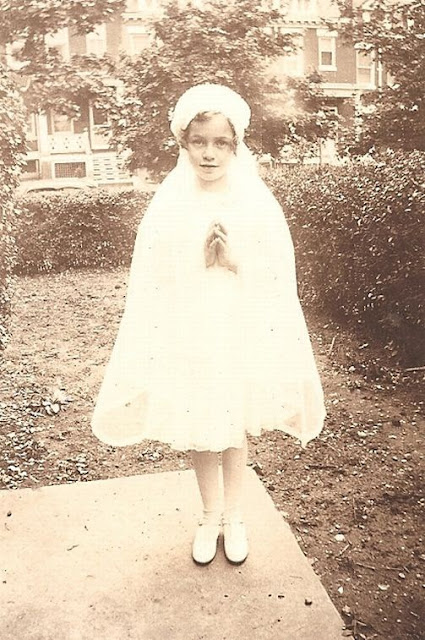 This photo was in a box of pictures that had belonged to my great grandmother Mary Theresa Sheehan Killeen Walsh.  Unlike most of the photos that I inherited from my dad’s family, this one bears a date on the back signaling that it was likely sent to Mary Theresa, maybe from one of her sisters in New York or some other relative.  (The row houses in the background actually look more Southern than New Yorkish.)


In the same batch of photos, apparently taken the same day sometime between 1919 and 1921, is this one that appears to be either the same contraption from a different angle or a similar one perhaps at the opposite end of the ramp. 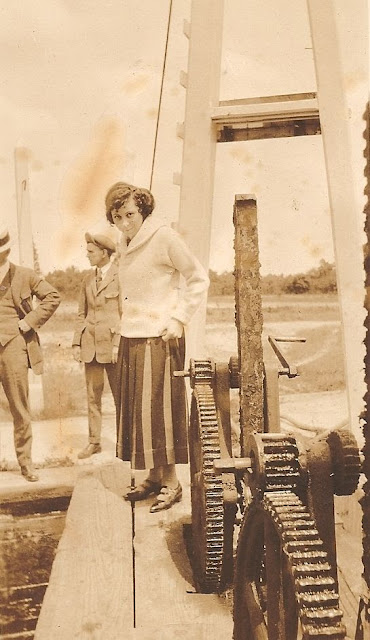 What function this contraption performs is a mystery to me, but an alert fellow-Sepian last week asked if it controls the locks on a canal.  If so, then my guess is this group of friends cruised through the Deep Creek Locks into the Dismal Swamp, which forms part of the Atlantic Intracoastal Waterway.

Hoping to confirm this theory, I went in search of historic photos of the Deep Creek Locks.   While I found nothing with which to compare this contraption, I did find lots of photos of canal boats, also known as narrowboats, which look similar to the one my great aunt Helen Killeen Parker and her friends rode on.

Plus, I found this YouTube video of a modern-day boater at the Deep Creek Locks.

Another YouTube video offers a good view of the gear and crank of a canal lock, albeit smaller than the one in Helen's photo, enough to convince me that's what the contraption was. It's a long video, but the opening minute or two will make it clear.

Have we solved the mystery of this whatchamacallit?  Maybe.  Surely the boat is a canal boat.  Virginia does not boast many canals, and Helen didn’t venture far from home if her photos can be trusted.  Between 1913 and 1929, the Dismal Swamp had fallen out of favor as a route for commercial traffic leaving it safe and relatively empty for pleasure boaters such as Helen and her friends.

Apparently canal boats are still common in many parts of Europe, so I shouldn’t be surprised that my fellow-Sepian recognized the working mechanism of a canal lock.

Today would have been my dad’s 85th birthday.

Sepia Saturday: Whatever Floats Your Boat

This week’s Sepia Saturday image features tall ships, a lighthouse, a windmill, and people strolling along the harbor of Littlehampton.  Although my photos contain few of those images, I do have some of people waiting along the water. 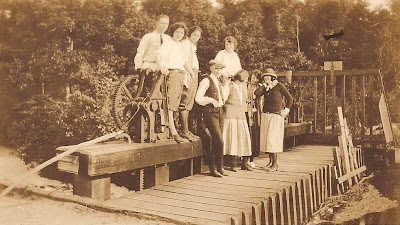 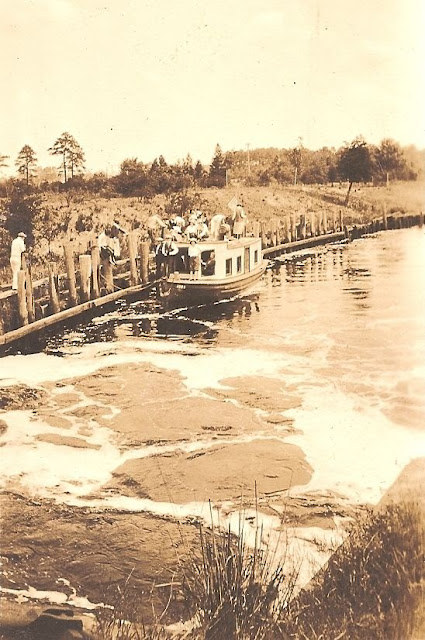 My great aunt Helen Killeen Parker seems to have been a popular gal in the late 19-teens and early twenties in Portsmouth, Virginia, always on some sort of outing.  What this occasion was and when are unknown to me.

It resembles a fishing boat, but Helen and her friends don’t appear to be doing any fishing.


It’s interesting that they were sitting on top of the boat. 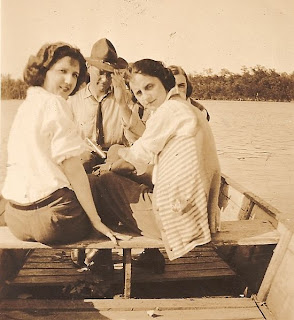 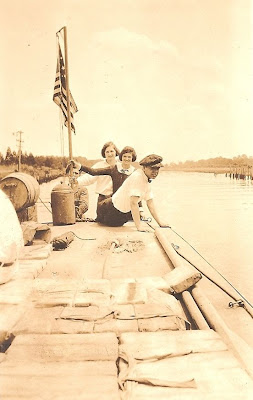 The channel appears narrow, so I wonder if they were boating through the Dismal Swamp.

Since I have no answers, I will have to wonder what this funny little boat was and where it went.

Cruise on over to Sepia Saturday for more tales of boats, lighthouses, and windmills.