Wednesday’s Child is one of the daily blogging prompts at Geneabloggers that features gravestones of children.

You’ve seen them – tombstones adorned with lambs or cherubs or angels.  There is no mistaking these markers as the resting places of beautiful lives cut short. 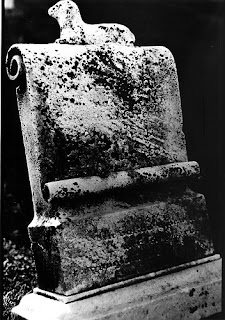 I’m always drawn to those little tombstones and wonder if there is anyone left to visit them. 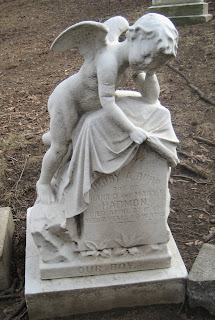 
My family is no stranger to the heartache of burying a child.  James Henry Jollett (1894-1909) was the only son of my great-great grandfather James Franklin Jollett and his second wife Eliza Coleman. On the day Henry died, he and his father were on the way to the train station to meet Eliza who was returning home after visiting family. Some of Henry's friends stopped him and invited him to go swimming with them. His father said he shouldn't go since Eliza would be expecting them. Henry promised to be back in time to meet the train. Unfortunately while swimming, he got caught in a current and his friends could not rescue him.


Teenagers!  I’m sure Frank wished he could just take back that moment when he gave in to Henry’s pleas.  Then when I think what it must have been like for Eliza to return home to such dreadful news, I can’t help thinking about my mother-in-law’s similar situation.


She had been enjoying a visit with one of her daughters who had moved to New York City.  Lord knows she didn’t have the easiest life raising 8 children and tending the chickens.  She needed a vacation.  She deserved it.  She didn’t need to hear her precious Jay Robert (1955-1967) had drowned in the neighbor’s pond during an afternoon of fun with friends who, like Henry’s friends, could not rescue him.


I never knew my great-grand uncle and brother-in-law.  Their lives were short, but they mattered.

Mystery Monday: Where did the Jolletts come from and where have they all gone?

Mystery Monday is one of the themes through Geneabloggers in which bloggers write about mystery ancestors or mystery records, anthing in their family history research which is currently unsolved.


Pretty much these are the last reminders of the Jollett family name, proof that this family lived and thrived and left its mark on the Old Dominion.  The name is considered so unusual today that few people have even heard of it.  So who were the Jolletts and where did they come from?  Family history says they came from the Alcase-Lorraine area of France; however, that’s only conjecture.   Yet, the corruption of spelling from Jolet and Jollett to Jolley in some documents hints at a French pronunciation.

The earliest recorded Jollett in Virginia was John Jollitt who arrived in 1637 as an indentured servant aboard the Tristram and Jane of London.  The Jollett name next appears on a marriage record in Essex County when Mary Jollett married John Coffey.  Apparently the Jolletts moved up the Northern Neck.  In 1711 Morrice Jolley patented his cattle brand in Westmoreland County.  In 1719 Morriss Jollott was a witness in an inquisition into the death of a man who had drowned.  Then in 1732 his Westmoreland County estate was settled and presented for record by his son William.  Four years later William Jollett bought 100 acres in Orange County from Joseph Bloodworth, and that seems to be the most likely story of how the Jolletts came to Orange County.

In the years between 1736 and 1750, Thomas Jolet appeared on a list of receipts at the estate sale of Thomas Stanton in Orange County.  He was compensated for traveling from Spotsylvania to appear as a witness at court in Orange.  James Jolet obtained a patent for 61.5 acres in Spotsylvania County.

In 1760 James Jolly purchased 127 acres of land along Little Crooked Run in Culpeper County from Joseph and Mary James for £25.  Eight years later Mary Jollett at the age of 18 married John Dogens Forrester in Culpeper County and then moved to Wilkes County, NC.  A clue that this Mary is connected to the Virginia Jolletts, more specifically the ones documented in Orange, is that she named her first son Fielding, a name that can be found at least three more times among descendents of the Orange County Jolletts.


In 1777 James and Gracey Jollett sold that same 127 acres in Culpeper County to Andrew Newman.  James Jollett appeared on the Culpeper tax records for the next ten years, but whether this is the same James Jollett or another James is not clear.  In 1786 Thomas Jolley sold 150 acres to James Jolley.  To date, this is the strongest candidate for a father for James.  The absence of Thomas plus the presence of a Mary Jollett and a James Jollett side by side paying personal property taxes suggests a mother-son relationship.

Further evidence that James was Mary's son came in 1791.  A marriage record for Judy Jollett and William Cave in Orange County cites James as bondsman and Mary as mother, suggesting that the father (Thomas?) had died.  That same year James was surety in the marriage of Sophia Jollett to Cuthbert Norman.   Several years later he was bondsman for Elizabeth Jolly who married William Eaton.  These brides may have been his sisters.

How many separate families existed and how widespread the Jolletts were is still a mystery confounded by the lack or quality of records as well as inconsistent spelling of the family name (Jollett, Jollet, Jolet, Jolliett, Jolliffe, Jolly, Jolley, and probably other variations).  The search continues.

This post was adapted from an article I submitted to the Greene County Historical Society magazine so many years ago that I can't recall the date.

Who are all those ugly people? 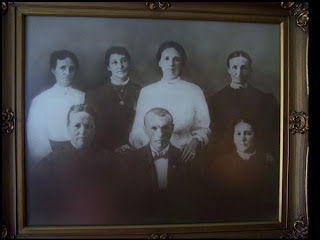 For years, this Jollett family portrait hung above the piano in my parents’ living room.  My great-aunt Violetta had several copies made from a little photo, and everyone who shared her pride in the Jolletts got one.  The focus for all of us has always been Mary Frances, Violetta’s mother and my mother’s beloved grandmother, far left on the back row.  With her are all her sisters and one of three brothers.  As children, my sister and I heard stories of the Jolletts during every visit with our relatives in Harrisonburg and Shenandoah, Virginia.  To children’s ears the Jollett family seemed like characters in a storybook, so mysterious and out of reach.  Naturally we willingly adopted Jollett Pride as our own.

Then baby sister’s boyfriend came a’callin’ and snapped us into reality.  He entered the living room, took one look at that gold-framed family treasure and said, “Who are all those ugly people?”

Until then, we probably never noticed the glum expressions and the general absence of beauty.  As my sister noted, “They probably didn’t have Mary Kay.”

I used to think the Jollett girls and brother were old in this picture.  Now I realize they were YOUNG. They were in their 30s-40s, maybe.  If that’s a wedding ring on Vic’s hand, the photo was taken after 1902.  The clothing appears to be 1910’s style.  Mary Frances’ brother Ulysses died in 1931 at age 44, so that helps date this photo as well.

Now HERE they’re old.  This photo was taken at a family reunion.  It had to be 1936 or earlier based on death dates of people in the picture. 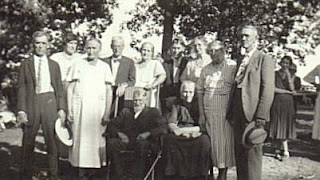 
This is my family.  The Jolletts aren’t my only line, but they are the primary focus of my research, which my mother started years ago when she decided she wanted to be in the DAR.  She encouraged my sister and me to join the effort. In my early years, I wanted to find ONLY Jollett information.  The good news was that there was so little, anything I found was likely to be “mine.”  The bad news was there was so little, period.  It became clear that the best way to learn about the Jolletts was to learn about the collateral lines too.  And so by necessity I’ve become a researcher of Davis, Shiflett, Rucker, Eppard, Sampson, Marsh, and others.

As this blog evolves [that is to say, as I figure out what I’m doing], I hope to share my research as well as stories about the good, the bad, and the ugly members of the Jolletts, etc.