Another Scrapbook Moves On

In 1924 my grandaunt Velma Davis was just 16 and heading to the Harrisonburg Teachers College (now James Madison University - Go Dukes), about 20 miles from her home in Shenandoah, Virginia. Like many girls of the time, she delighted in taking pictures of her friends to glue into a black paper scrapbook. Close friendships, dorm life, silly antics, snow, and school activities are documented forever in those pages, pages now dusty and brittle, chipping away.

I am not sure why I was elected to be the caretaker of Velma’s scrapbook, but what a gift it has been. The tattered scrapbook has worked overtime providing me with lots of material to write about. Nearly every photo has been featured in my blog at least once, some multiple times. No wonder faithful readers have come to know Velma on a first name basis. 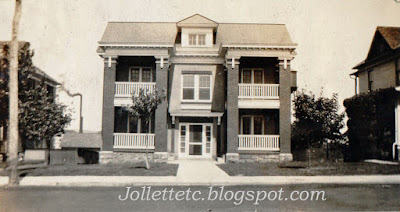 But it was the photos of Velma’s dorm Wellington Hall that caught the eye of Dr. Philip Herrington, Assistant Professor of History at JMU. An ongoing project in his Historic Preservation course is documenting the area that was demolished and redeveloped as the Forbes Center across the street from the Quad.

A simple Google search brought him to my blog. According to Dr. Herrington, surprisingly very little information about the houses and buildings is available despite the fact that they were in use as late as 2006. He remarked that Velma’s scrapbook contains the largest collection of historically significant photos of the area. To me that is both sad and funny considering the poor quality and condition of some of the photos.

One email led to another. When Dr. Herrington asked if I would allow the Special Collections department of the library to scan the photos, I realized it was easier for me to finish scanning what I wanted and just give them the scrapbook.

So on Friday, October 12, 2018, Velma’s scrapbook returned to its first home, the college campus. It will reside in an archival box in Special Collections on the second floor of the Carrier Library, a building that did not even exist when Velma was a student.

I must admit that I have an even greater appreciation for Velma’s photos after meeting with Dr. Herrington and Tiffany Cole, Special Collections Archivist. Both were eager to see the photos. It was fun to watch their faces as they looked for architectural clues, saw for the first time the outdoor pool which no longer exists, and spied the old hockey field now filled by a science building. While some photos are purely nostalgic, others will help Dr. Herrington’s students in their effort to develop an architectural history of the college. Without a doubt Velma and her sister Violetta would be thrilled to know the scrapbook is of interest nearly 100 years later.

Three years ago, my sister and I proudly gave our father’s album recounting his time in the Coast Guard to the Custom House Maritime Museum in Newburyport, Massachusetts. Like Velma, Daddy was just a teenager killing time taking pictures with no thought of lasting influence. Inheriting such personal items as a scrapbook can be a burden when contemplating what will become of them when you’re gone. Donating them to a school, a museum, or a society that will preserve them feels good.

That good feeling never gets old.