This week’s Sepia Saturday prompt featuring children joining hands to play a circle game reminds me of an old photo of children at play outside the Frazier Mountain School.

Frazier Mountain was the stomping grounds of my 3X great-grandmother Nancy Frazier Shiflett and her many aunts and uncles and cousins. However, the photo is not THAT old, more likely from the very early 1900s.

That is when the settlement movement made its way to the mountains of Virginia. The aim of settlement schools was to provide education for children in rural and mountain areas that were often not served by the county, usually for economic and logistical reasons. Churches often filled the gap building a school, a church, a clothing bureau, and sometimes even a hospital.

Frederick William Neve was an Episcopal minister born and educated in England who was asked to come to Virginia. He was based in the town of Ivy in Albemarle County, but he was drawn to the Blue Ridge Mountains just twenty-five miles away. He found someone to take him into those mysterious communities – Shifflett’s Hollow, Bacon Hollow, Mutton Hollow, Blackwell Hollow, and Simmons Gap – places that inspired stories of backwoods justice and suspicion towards strangers.

There were probably 175 people living there, but reportedly only two of them could read and write. Neve inquired about the mountain community and learned that no school or church existed within miles of the area known as “Frazier Mountain” to the locals but previously as “Lost Mountain.” Neve actually liked that name because he reasoned that without religion and education, the people were indeed “lost.” (Today it is known as “Loft Mountain.”)

So Neve looked for a location for a mission school and bought some property straddling Greene and Albemarle counties. Between 1890 and 1912, Neve started twenty missions, ten of them in Greene County alone. He continued to work with the mountain people building mission schools and churches throughout seven Virginia counties. Frederick Neve is remembered today as the founder of the mountain mission movement of the Episcopal Church in Virginia, 1888-1948.

Neve’s most ambitious mission project was the co-ed Blue Ridge Industrial School, which offered more advanced education beyond the elementary level. Since most students were likely to remain in a rural area, the school provided practical training for farm life and related occupations. The school even operated a cannery for a number of years. BRIS was the first accredited high school in Greene County.

Today all of the mission schools have closed except for the Blue Ridge school which is still going strong as a boarding school for boys.

Join hands and circle around to Sepia Saturday for more fun and games.

On Thanksgiving Day, turkey is the highlight of the harvest table. My husband’s family historically were farmers, and many of them were in poultry. Turkey farmers.

My brother-in-law was not a farmer, but in 1985 he managed to attract a flock of wild turkeys to his yard.

Those turkeys were far too trusting.

This week’s Sepia Saturday prompt inspires a look at spirit pictures and double-exposed photographs. As a product of the Polaroid One Step and Kodak Instamatic age, I enjoyed fairly clear pictures for many years. That is to say, people and events are easily recognizable even if poorly framed. It wasn’t until I purchased a REAL camera requiring me to load the film myself that the potential for double-exposures emerged. And emerge they did, and always at the most inopportune time.

It was May 1982 and Baby Sister was graduating from college. Surely if any milestone should be preserved, it was this one. We brought the GOOD camera that day.

We also used the GOOD camera in July when we visited the grandparents and showed our year-old daughter her uncle’s hunting dogs. In September, we captured her joy in playing in the dirt in our little square-foot garden.

All on the same roll of film.

Bad photos seem to outnumber the good in the very old albums and envelopes of pictures passed down to me. They’re out of focus, faces are missing, people are too small to recognize, and dark spots and white spots obscure the intended subject.

Sometimes I shake my head and wonder why anyone kept them.

Nancy Messier of My Ancestors and Me knows why. In looking at a group of pictures from a day spent with her daughters and grandchildren, she noticed the poor framing, the light and dark, the poor focus. Yet despite their poor quality, she kept them. After all, the point of the photo wasn’t to highlight technique. It was to capture forever those precious hours blowing bubbles and pulling kids in a wagon. With a calm recognition of how quickly children grow up, Nancy concluded that a bad picture is better than no picture.

Maybe that is something I knew but had forgotten, explaining why I carefully inserted all those double-exposed pictures into an album for safe-keeping. The pictures are a goulash of parental pride, a young woman’s accomplishment, a baby eager to pet that happy dog, a smiling face smudged with garden soil – stories flowing in and out of each other. 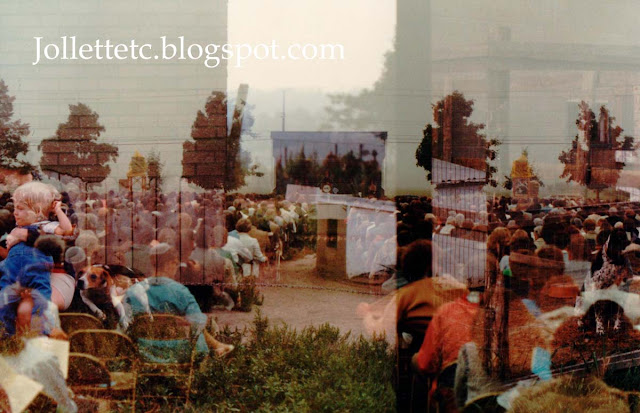 But they still make my sister look like she graduated in a dog kennel.

If you visit the bloggers at Sepia Saturday twice, will you be double-exposed?