Jollett Etc started 2015 with a bang but slowed to a crawl by the end of summer. Suddenly LIFE took over as we started preparing to welcome the first grandbaby. Blogging definitely took a backseat to washing the soon-to-be-new-momma’s own baby clothes and blankets to pass along, to shopping and attending parties, to fixing up some heirloom baby rockers.

In looking back over the year, I am actually surprised at how much I managed to accomplish. So without further ado, here are the highlights of 2015:

This week’s Sepia Saturday prompt is inspired by the holiday season. I recently acquired my great-grandmother’s two scrapbooks of greeting cards that she saved and glued – and I mean GLUED to death! – onto pages that have turned brown and brittle since her death in 1939. From the looks of Mary Theresa Sheehan Killeen Walsh’s pages, my need for order and logic did not come from her. Apparently she glued as she grabbed a card from wherever she had kept them, perhaps a bag, box or drawer. Smack dab in the middle of a parade of Christmas cards is a valentine or Mother’s Day greeting only to pick up again with Christmas cards soon to be interrupted by St. Patrick’s Day and Get Well. 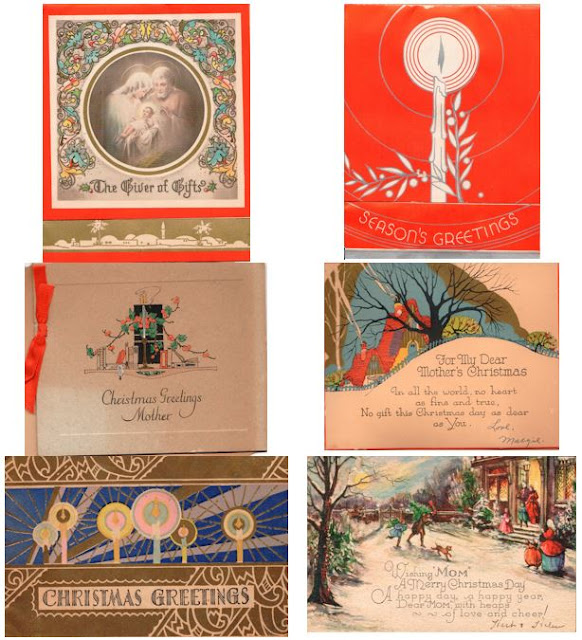 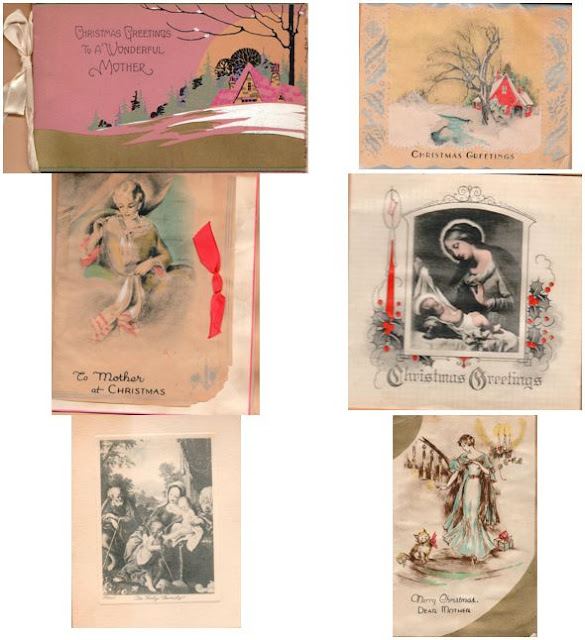 Here is a card sent in 1935 from Mary Theresa's sister Delia Sheehan Christian (the one whose descendants on Facebook know nothing about her ~sigh~). 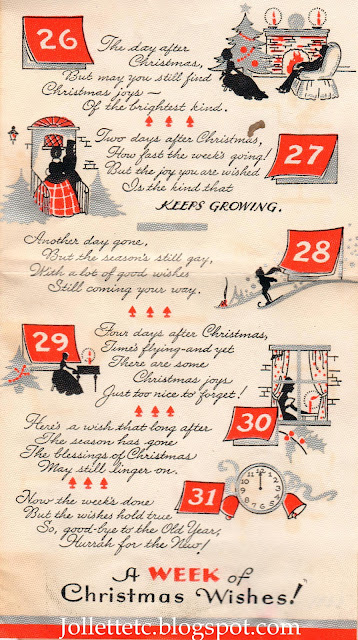 Sepia Saturday: "I am well"

This week’s Sepia Saturday prompt features a do-nut eating soldier on the cover of the Salvation Army’s newspaper The Mess Kit. My husband’s maternal grandfather wore a similar uniform as a soldier during World War I.

Russell and Hattie Kohne had been married less than a year when he was called into service. Russ probably enjoyed his fair share of do-nuts, but I know for sure that he got cake. One of his letters to his young bride back in Hardy, West Virginia, survives to attest to that fact: 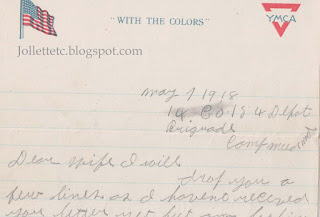 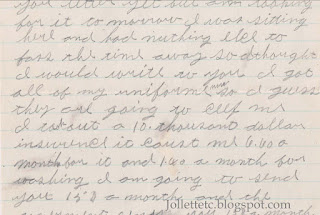 Dear Wife I will drop you a few lines as I haven’t receved your letter yet but am looking for it tomorrow  I was sitting here and had nothing else to pass the time away so I thought I would write to you. I got all of my uniforms now so I guess they are going to keep me. I took out a 10 thousant dollar insurance it cost me 6.60 a month for it and 1.40 a month for washing I am going to send you 15$ a month and the
[line is cut off] 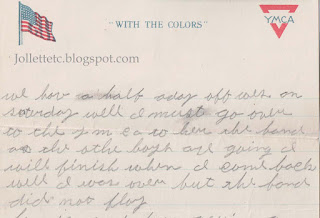 We hav a half aday off [?] on saterday well I must go over to the YMCA to here the band as the othe boys are going I will finish when I come back. Well I was over but the band did not play. 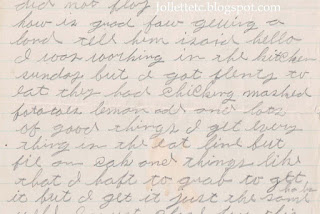 How is grad paw getting a lond tell him isaid hello I was working in the kitchen Sunday but I got plenty to eat they had chicking mashed potatoes lemon ade and lots of good things. I get every thing in the eat line but fil on cake and things like that I haft to grab to get it but I get it just the same ha ha

Well I must close for this time. Ancer soon love to you.
Good by
Husband

“Wife” and “Husband” – did they actually refer to each other that way? Maybe they were still reveling in the Honeymoon Phase of their marriage, in love and in love with their new roles.

The letter with its youthful and playful tone is in sharp contrast to the man I knew. Russ was already a grumpy old man when I met him in the early 1970s. Barry’s memories of visits with his mother’s parents are not pleasant. The grandchildren were instructed to sit quietly on the sofa. Barry recalls being hungry and nervous the entire time. When Russ had had enough, he would announce, “I guess it’s time for you to leave.” Russ probably invented the saying, “Children should be seen and not heard.” He probably thought they should not be seen either.

Russ was well known for saying whatever was on his mind. He once threatened to whip a boy who was dragging a deer hide around the parking lot of the local watering hole. Russ had warned the boy a couple times repeating, “Put that hide back in the truck. It stinks.” No doubt he would have made good on his word too had the boy’s father not quickly rescued him.

Where did this mean streak come from? Surely alcohol was part of the problem. Russ’s childhood might also have contributed. His father was in and out of jail for any number of big and small crimes, so the children were split up, Russ living with his grandfather and his sister Laura living with an uncle. 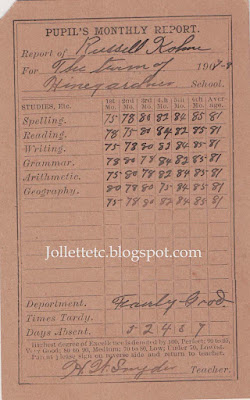 In school Russ was just an average student. His report cards reflect the instability of his home life. The notation that his “deportment” was “Fairly good” suggests it was also probably NOT so good at times. The teacher urged him to be more regular in attendance and to “persevere.” The report cards were signed by a step-uncle, Jackson Kohne, who was not a Kohne at all; he simply went by that name for convenience. 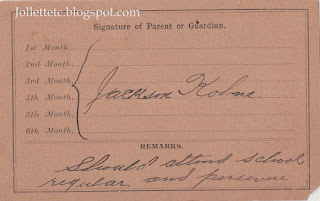 If that gruffness and meanness were not part of Russ’s DNA or upbringing, war surely did not help. What he experienced in Europe in 1918 must be left to our imagination, but a message scribbled on a postcard addressed to his wife expresses relief on returning home: 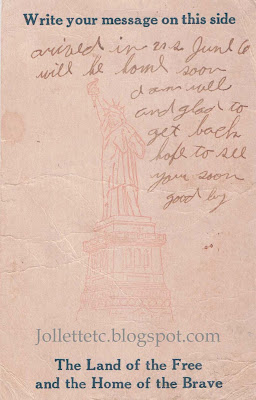 The front of the postcard shows Russ was a member of the 313th Engineers.


The Engineers were responsible for bridge and road repair, construction and maintenance of trenches, providing clean water, constructing or removing barbed wire. They also built barracks and target ranges, mess halls and hospitals. The Engineers were not relied upon for combat, but often they were the ones launching gas attacks.

Russ said he was “well and glad to get back.” He brought home an important souvenir: his M1917 helmet, often called a Tommy helmet, Tin Hat, or doughboy helmet. Unfortunately, I do not have a picture that would show why this helmet was and still is so precious. There is a dent from a bullet that did not pierce all the way through to Russ’s temple.

That could make anybody cranky. Darn good hat though.

Follow the do-nut crumbs to Sepia Saturday to see what the other “ultimate consumers” are up to.

This week’s Sepia Saturday prompt is an illustration from Robinson Crusoe showing a gun-toting, fur-bedecked man with his dog. While there are many directions suggested in the drawing, I cannot take my eyes off that hairy outfit.

In the world of fashion, fur never goes out of style. Of course, attitudes about wearing animal skin swing from year to year and from person to person. Historically, fur was a practical reality, both convenient and warm. More recently the wearing of fur has been viewed as barbaric and cruel. “Fur” sure, it is not a neutral topic.

But those who appreciate fur wear it proudly for its warmth, its beauty, and its prestige. Nothing says “luxury” like a fur, whether it’s a full coat

a jacket or stole

a collar or cuff

or a mink, fox or ermine complete with head and feet dangling around one’s neck.

“Fur” your viewing pleasure, visit my friends at Sepia Saturday.