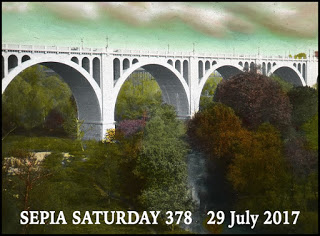 This week’s Sepia Saturday photo featuring the handsome Taft Bridge in Washington D. C. brings to mind this photo of my grandaunt Catherine Walsh Barany, my paternal grandmother’s younger sister.
It’s not the Taft, but it is SOME bridge in the Washington D. C. vicinity  oops Niagara Falls.

[EDITED: Thanks to Mike Brubaker, I now know these photos were not from the trip to D. C. but from a trip to Niagara Falls. No wonder I could not find the name of the bridge! Unfortunately, if Mary Theresa wrote home about seeing the Falls, the letter did not survive.]

My great-grandmother Mary Theresa Sheehan Killeen Walsh rode the bus to northern Virginia to visit her two youngest daughters, Kat and Tate and their husbands. The sisters lived not terribly far apart, and they liked getting together to show their mother the sights. On this particular trip, Mary Theresa divided her time staying roughly a week with one before moving on to stay with the other.

In a letter dated March 10, 1936, Mary Theresa wrote all about her visit with Kat and Tate, but not once did she mention a walk across a bridge, going to a park that had a view of a bridge, or even seeing a river.
However, Mary Theresa did report on all the things she did. She was especially impressed that they could go to so many different movie theaters and catch a different picture every night. One in particular was “The Prisoner of Shark Island.”

Never heard of it. It sounds like a horror movie but it was actually the story of Dr. Samuel Mudd who was imprisoned for treating President Lincoln’s assassin in 1865. The movie was directed by John Ford.

Other highlights included visiting the Rosemunds (who?), Willie Edwards (who?), and George and Mandy (who?). She had lunch out, visited a Catholic church and a 5 & 10 cent store. What a juxtaposition!

The Rosemunds showed Mary Theresa a fine time. Here is what she said about their driving tour:

“Old man Fleming” was my great-grandfather, John Fleming Walsh who had died in 1918. I wonder what she meant by calling him that.

Since she saw the national cemetery, surely she also saw the Arlington Memorial Bridge. 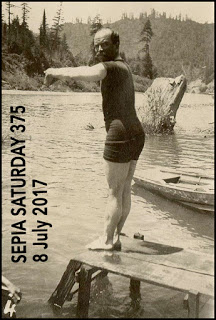 The gentleman in this week’s Sepia Saturday photo prompt reminds me of so many men and boys captured on the film in my grandaunt Helen Killeen’s little box camera. Aunt Helen rarely labeled her photos with names, opting instead for funny little captions like 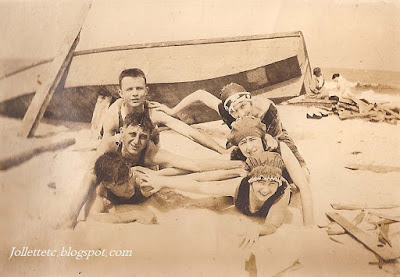 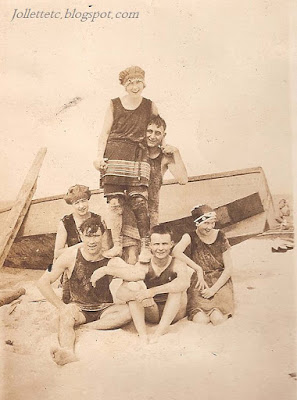 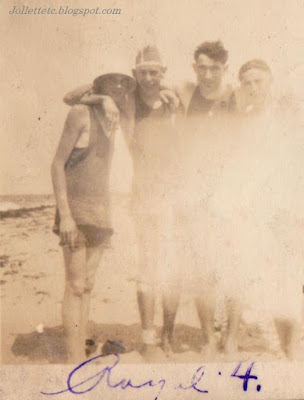 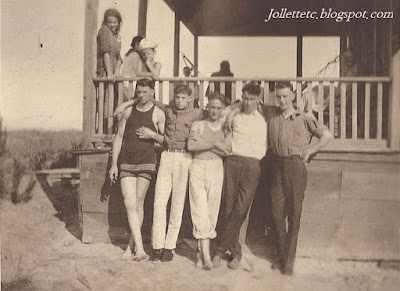 Recently that silly caption “Terrible Five” has taken on a whole new meaning. I was going through some photos, letters, and other memorabilia belonging to Aunt Helen and her sisters when I unfolded a typed poem glued to a heavier piece of paper, maybe a folder or large mailer. As I read it, I recognized scenes recorded in photos of a camping trip which was the focus of an earlier Sepia Saturday post. 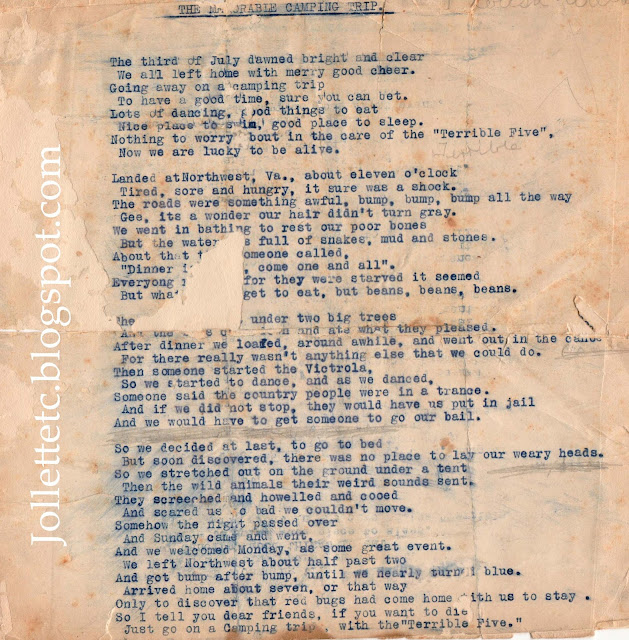 ** A triangle of paper is missing.  Words in brackets represent a logical guess based on the syntax of the sentence. If no logical guess could be made with any certainty, I inserted dashes inside the brackets.

The third of July dawned bright and clear
We all left home with merry good cheer.
Going away on a camping trip
To have a good time, sure you can bet.
Lots of dancing, and things to eat
Nice place to swim, good place to sleep.
Nothing to worry about in the care of the “Terrible Five,”
Now we are lucky to be alive.

Landed at Northwest, Va., about eleven o’clock
Tired, sore and hungry, it sure was a shock.
The roads were something awful, bump, bump, bump all the way
Gee, it’s a wonder our hair didn’t turn gray.
We went in bathing to rest our poor bones
But the water [was] full of snakes, mud and stones.
About that [time] someone called,
“Dinner is [ready], come one and all.”
Everyone [ - - ] for they were starved it seemed
But what [did they] get to eat, but beans, beans, beans. 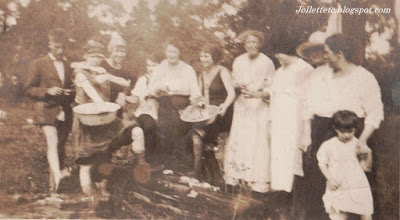 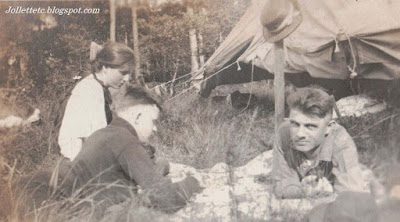 And [ - - ] down and ate what they pleased.
After dinner we loafed around awhile, and went out in the canoe
For there really wasn’t anything else that we could do. 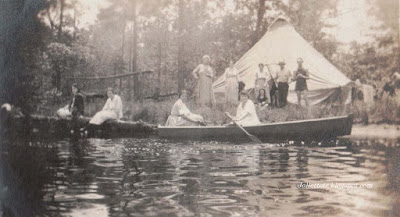 Then someone started the Victrola,
So we started to dance, and as we danced,
Someone said the country people were in a trance.
And if we did not stop, they would have us put in jail
And we would have to get someone to go [sic] our bail.


So we decided at last, to go to bed
But soon discovered there was no place to lay our weary heads.
So we stretched out on the ground under a tent
Then the wild animals their weird sounds sent.
They screeched and howelled and cooed
And scared us so bad we couldn’t move.
Somehow the night passed over
And Sunday came and went. 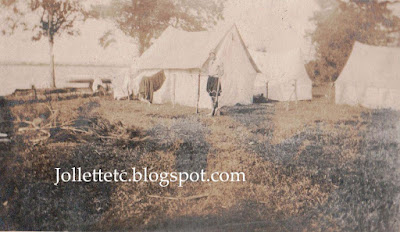 And we welcomed Monday, as some great event.
We left Northwest about half past two
And got bump after bump, until we nearly turned blue.
Arrived home about seven or that way
Only to discover that red bugs had come home with us to stay.

So I tell you dear friends, if you want to die
Just go on a Camping trip, with the “Terrible Five.”

The moniker “Terrible Five” must have been part of a running joke among the friends who seemed to enjoy getting together often whether at the beach or at a riverside camp. Perhaps the poem was written – AND preserved for presentation – to be read at some other gathering of “The Gang.”

Jump in – the water is fine at Sepia Saturday, and so are the photos and stories.