Sepia Saturday: One Thing Leads to Another 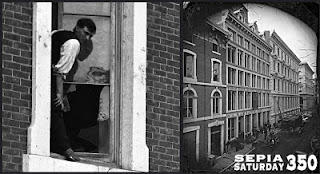 This week Sepia Saturday’s challenge is to focus on a small detail in an old photograph. The photo in the header of Jollett Etc. is a favorite because so many family members are gathered at the annual Jollett Reunion and because most faces are clear enough to identify them. I thought I knew almost everyone until Sepia Saturday made me take a closer look. 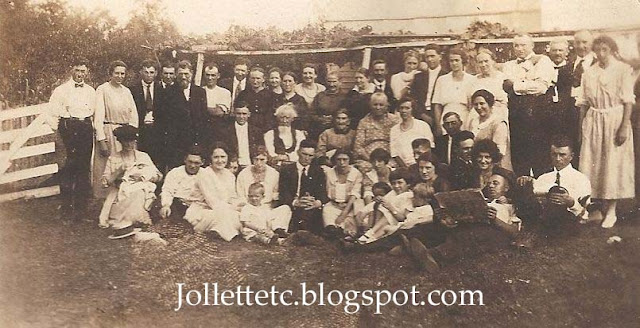 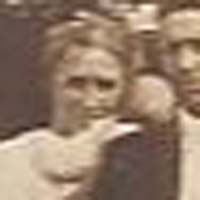 Like this baby. Who is it? And who is holding it? 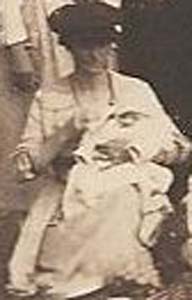 And here’s another baby. Who could it be?

Using my handy dandy Family Treemaker, I searched for people born in 1921 (since 1921 was the date written below the photo in the family photo album). To cover all possibilities, I also looked in 1920. I quickly discounted the 1920 babies because they were clearly older than these appear in 1921; furthermore, there should have been some two and three-year old siblings in the photo too. The best candidate for the baby on the back row is Janice Monger who might have been held by her grandmother Sallie Jollett Clift. There is a resemblance between this woman and her sister Mary Frances Jollett Davis, my great-grandmother. However, in no photo of Sallie that I have ever seen was her hair this light; besides, she parted her hair on the other side. So maybe not Sallie and Janice after all.

I turned my attention to the other woman with child. She looks much like Sadie Lam Jollett, wife of my great granduncle Ulysses Jollett. Her only grandchild was Andrew Jollett Steppe, born in 1923. Hmm.
So there is the possibility that the photo was taken in 1923 because Minnie Coleman Maiden and her daughter Virginia were in a photo dated 1923 wearing the same dresses and sporting the same hair style. Undoubtedly the picture was taken at this particular reunion, and someone dated one photo incorrectly, whether it was 1921 or 1923.

My attention then went to all those old people hoping one of them at least would have been dead before 1923 to clinch the deal. Wait – who was this ol’ gal sitting next to my 2X great-grandfather James Franklin Jollett?
It was not his wife Eliza Jane. For years I did not pay attention to her, assuming that man and wife would be sitting together, but there is Eliza standing behind her.
Could it be Eliza Jane’s mother Diannah Shiflett Coleman? Some time ago I was given this photo of Eliza Jane, her mother and brother.

While Diannah’s face looks softer in this very-worn photo than in the reunion photo, that is the same dress and apron. Note the collar and cuffs. Eliza’s dress is the same too. Those pickets are from the Jolletts’ fence hidden by all the people in the header photo. And look – there is Eliza Jane’s brother at the reunion too.

There is another old woman that I had not previously identified although she seemed familiar somehow. It turns out to be Clementine Morris, sister of James Franklin Jollett’s first wife Lucy Ann. Clem must have been wearing her “reunion dress” because it looks like the same one she wore to the Morris Reunion.

Clem was still alive and kicking in 1923 too. 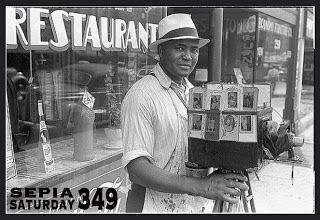 This week’s Sepia Saturday prompt is a photographer at work. The photo reminded me of a galley proof from a newspaper dated February 1983. We had the proof framed and displayed in our home for a number of years. Why? Because my daughter and I were featured. Oh, the article was not ABOUT us. It was about a local children’s photographer.
I was a proud momma and I wanted professional photos, but in 1983, there were not many photographers to choose from, affordable ones, that is, unless I wanted to use the silly backdrops available at J. C. Penney or Sears. When a new studio opened nearby, I quickly checked it out. The photographer was just starting out and his prices were more like what I had in mind.

We scheduled a family photo and were quite pleased with his work. Not long after that, he called to invite me to bring Jordan for a free photo shoot because a reporter was planning a feature story about him as a children’s photographer. Woohoo – free photo!

After that we scheduled annual pictures of the girls.

Until he quit the business. What’s a mother to do?

Word spread quickly among my mom-friends about a great photographer who came to the house. What a concept – just like those itinerant photographers of the past.

My sister and I thought a picture of the grandkids together would make a nice Christmas present for our parents. So we called the photographer who had won the hearts of so many and set a date. He arrived right on time. This is going to be fun, I thought. The living room was nice and clean. Jordan and Zoe looked darling in their new velvet Christmas dresses my mother had made them. Joel was precious in a very proper English-style shorts and blouse with a French hand-sewn collar.

Then WHEW what a night we had! First of all, the photographer made fun of how my sister dressed her baby boy. He thought she was turning him into a sissy. But as she pointed out, he has a lifetime to dress like an old man.

And then the worst (although we can’t stop laughing about it now): the photographer picked Joel up to bounce him around a bit to “loosen him up.” Now picture this: he then tossed Joel playfully into the air and WHOOPS BAM BOOM - oops sorry - accidentally DROPPED him on the floor!

I wish we had a photo of that guy.

Say CHEESE. Say WHISKEY. Say, how about visiting my friends at Sepia Saturday for more stories of photos and photographers!