A to Z April Challenge: X is for the X

This is day 24 of the A to Z April Challenge. 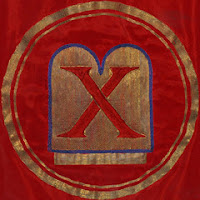 is for the X husband.  George Thomas Clift was a dirty dog.  He cheated on his wife, my great grand aunt Sallie Jollett Clift.


He verbally abused her.  He even pulled a gun on her in front of their 8-year old daughter.


Apparently ol’ George considered himself THE MAN who could do as he pleased in his little chauvinistic world.  He kept love letters and post cards and photos from his various affairs spanning several years.  And he did so in plain view where Sallie easily found them.


It’s all right there in the 1913 Chancery Cause files for Page County, Virginia.  Every letter.  Every photo.  Public record.


Including this gem from a photo booth:

That’s good ol' George and one of his good ol' mistresses.

f you’re caught between a Xenolith and Xylols, you might want to head over to the A to Z April Challenge for some Xeroxing.

Email ThisBlogThis!Share to TwitterShare to FacebookShare to Pinterest
Labels: Clift