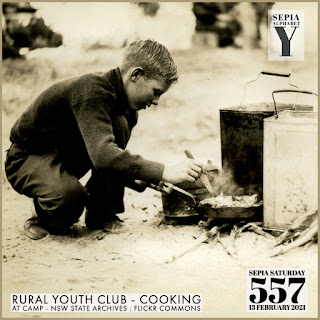 This week on Sepia Saturday we are highlighting the letter “Y.” Even though the Village People did not popularize any song called “YWCA,” the young women’s side of this Christian association was alive and well on American college campuses from very early on in the 1900s. Even state institutions that remained strictly non-denominational strived to encourage students to lead lives of the highest standards and moral character.

Thus, it was no surprise to find that my mother was a member of the Young Women’s Christian Association during her two years at Shenandoah College and Conservatory in Dayton, Virginia. 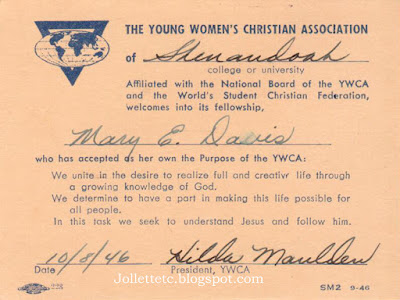 According to the Student Handbook, the YM and YWCAs served to “promote the welfare of the students in their social and spiritual life.” The officers and cabinets arranged Vesper Service every Sunday evening and weekly chapel programs. They also coordinated the Annual Religious Emphasis Week, the highlight of which was hosting an outstanding speaker who remained on campus throughout the week, ever ready to meet with interested students.


Somehow, I doubt my mother took advantage of such opportunities. Reprimands from the Student Government Association show she was hardly the exemplary student the YWCA had in mind. (Read about her bad behavior HERE.)

The social life promoted by the Y was more her speed. In February 1948, the Y hosted a “Queen of Hearts” Party as part of “Leap Week” allowing the girls to invite the boys. It WAS Leap Year, after all. There was a Bingo with pies and cakes for prizes.
Guess who one of the winners was – go ahead. Guess. 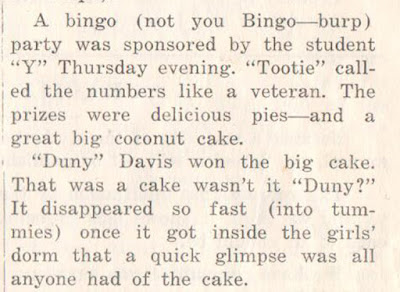 A bingo (not you Bingo - burp) party was sponsored by the student "Y" Thursday evening. "Tootie" called the numbers like a veteran. The prizes were delicious pies - and a great big coconut cake.

“Duny” Davis won the big cake. That was a cake wasn’t it “Duny”? It disappeared so fast (into tummies) once it got inside the girls’ dorm that a quick glimpse was all anyone had of the cake.

I wonder if "Duny" carried that luck with her to Madison College the next two years. For sure, her reputation followed her! ;-)

There will be no yawning over the yarns yielded by yuppies, youngsters, yokels, and yodelers over yonder at Sepia Saturday.