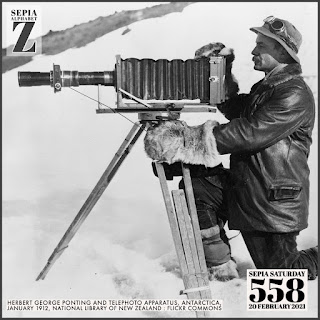 This week’s Sepia Saturday photo of the man with a ZOOM lens shows we have reached the letter “Z.” As a child, I hated for anyone at school to see any kind of “official” paper like a report card or notice from the principal that might have my middle initial on it: Z. When anyone saw that my middle name began with the letter “Z,” they would react in shock and disbelief that there could be any sensible name starting with “Z.” “What is your name? Zebra? Zipper?” Fits of laughter would follow.

It is “Zoe.” It has become a rather popular name in recent years, but it was just unheard of in my little corner of the world in the 1950s-60s. Surprisingly, on the scale of “weird and unusual” my name doesn’t even come close when compared to some of the names my 2X great-grandparents Mitchell and Martha Willson Davis bestowed upon their 15 children.

Zedekiah. Zephaniah. Zibiah Saloma. And those are just the ones that fit the Sepia Saturday theme. There is also Jerusha and Amaziah.

How did Mitchell and Martha come up with these names? Nowhere in my research do these names show up in the family lineage, so they clearly were not honoring a relative or ancestor. There were no Baby Name books in the 1850s-70s. Or were there? Maybe THIS was their Baby Name book:

And about those other names that don’t start with “Z”:

Saloma – beautiful daughter of Herod II who danced at the birthday celebration of her stepfather Herod Antipas and demanded the head of John the Baptist and got it!!

(I don’t know, but if Mitchell and Martha were trying to imbue their daughter with some kind of biblical virtue, these two names, Zibiah and Saloma, seem to cancel each other out.)

Jerusha – wife of King Uzziah of Judah and mother of Jotham; the name itself comes from the Hebrew meaning “possession” or “inheritance”

Josiah – the 16th king of Judah considered righteous and credited by scholars for religious reforms and for compiling Hebrew scriptures; he is also one of the kings mentioned in the patrilineage of Jesus according to the Book of Matthew

I wonder what happened that most of the other children received more mundane names like Walter, Ida, and Minnie. Surely it isn’t that Mitchell and Martha gave up on the Bible or lost their faith as these and the other ordinary names are sandwiched between the lofty ones.


Perhaps the names of noble figures were meant to inspire their children to greatness. Whatever the reason, these biblical names suggest Mitchell and Martha were at least somewhat devout Christians who were well-versed in their Bible. After all, they did not slip up and name any of them Jezebel or Abimelech.

Zip, Zoom or Zigzag over to Sepia Saturday for more “Z” stories from some zealous zanies.