James and Nancy Jollett were on a roll with those daughters.  Number 4 was Elizabeth Jollett, born about 1796 in Orange County, Virginia.  The little bit of her life that remains on record can be found in 3 census records, a listing in a marriage register, and a death record.

On May 20, 1822, James signed permission for young Elizabeth to marry Reuben King. Her brother Simeon served as witness and bondsman.

Now Reuben is an enigma.  As unlikely as it sounds, the name “Reuben King” was as popular as John Smith.  A search for the name finds a large number of Civil War records for ol’ Reuben, but it is highly unlikely that they could be THIS Reuben’s records.   He would have been much too old to serve. 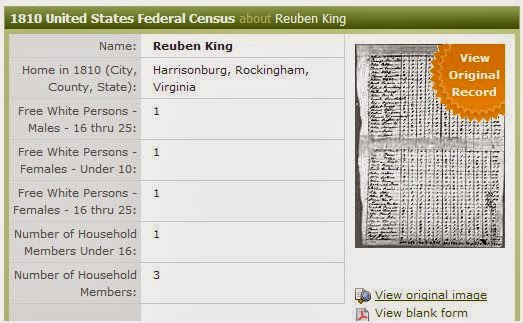 In 1810 there is a Reuben King listed as head of household in Rockingham County.  A marriage record dated 1809 in Rockingham for the union of Reuben to Anna Sipe suggests this is the family.  But that marriage predates the 1822 marriage of Reuben and Elizabeth.

OK, Elizabeth could be a second wife.  A much younger second wife.  It happened all the time when a widower needed someone to step in and care for his children. 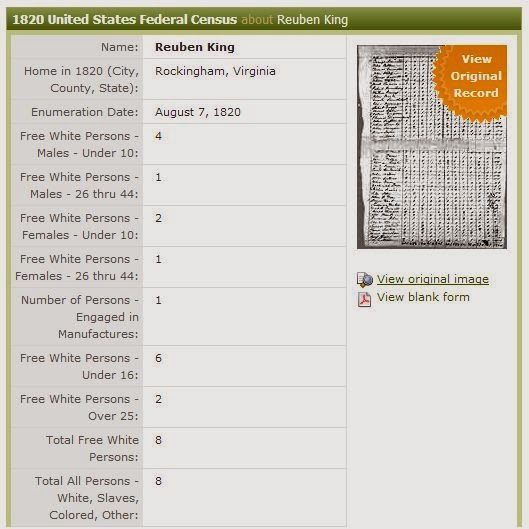 However, there is no evidence that Reuben was widowed or that Elizabeth became stepmother to the large number of children in the King family of 1820.

In 1830, back in Orange County where Elizabeth’s parents lived, the ages and gender of James’s household suggest there could be a son-in-law and grandchildren there.  But the numbers do not match the 1820 Reuben King family.  Perhaps that family was old enough to be on their own and he was starting over with Elizabeth.  Or this is an entirely different Reuben King.

Sometime after 1830, I believe Reuben King dropped out of the picture either by desertion or death.  In the 1840 Greene County, Virginia census, the ages and gender of the 5 members of the household fit James Jollett (70-80), Elizabeth King and her sister (females 40-50), and their respective daughters (20-30).   No Reuben King in the state of Virginia.

In 1850, Elizabeth King was head of household in Greene County, probably in the house she grew up in, maybe taking over when her father passed away.  Living with her were her daughter Columbia, future son-in-law Thomas Marsh, and a sister and niece.

In 1860, the 76 year old Elizabeth, who could neither read nor write, was living in the household of Thomas Marsh, husband to her daughter Columbia.  Elizabeth now had one grandson whose name appears first as “E T.”

By 1870, Thomas had moved the family to Rockingham County.  Elizabeth was still with him, Columbia, and the grandson “Elliott.”  Also in the household is someone named Susan Jolliffe.  Even if that is a miss-hearing and misspelling of Jollett, I don’t know who it is.

In 1878, Elizabeth’s death was reported by Frances Jollett who is listed as her granddaughter.  I believe Frances was actually a niece, not a granddaughter since Thomas and Columbia had no other children besides Elliott.