This week’s Sepia Saturday prompt features a statue of Thomas Jefferson, third president of the United States and definitely one of the greatest.  I’ve always felt particularly “close” to Jefferson, partly because my Jollett ancestors were contemporaries and near neighbors, and partly because my dad was a product of Mr. Jefferson’s university, THE University of Virginia (Wahoos are very particular about putting the accent on “THE”).

Daddy was a student when he and Momma married and moved into a little white trailer on Copeley Hill where many married students lived.  Since his primary goal was to finish school, Daddy worked occasionally, but Momma was the one bringing in a steady income as a typist in the Bursar’s Office on the college campus.

They used to laugh about driving a “tall car.”  I suppose it must have been like a Model A or other gangster mobile still operable in 1951.  Whatever it was, it had poor brakes and had to be tied to a tree to keep it from slipping into gear and driving itself down the hill.

My job was simply to bring sunshine into everyone’s lives and keep young parents on their toes. 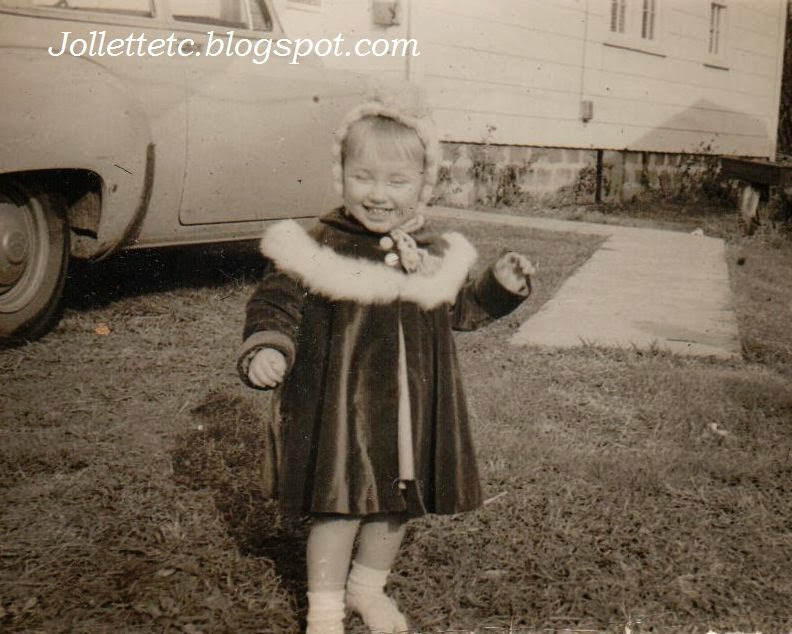 Like the time I toddled into the bedroom and asked Momma, “Who’s that man in the kitchen?”  Poor Momma, probably only 24 years old.  She was petrified.  She found a baseball bat or club or something and inched her way to the empty kitchen.   Did I make this man up?  Or was there really a stranger in the house?  Momma never knew for sure, but since there were often “hobos” riding the rails through Charlottesville, she believed he was real.

Or like the time I told Momma there was a kitty cat under the bed.  Momma did not like animals in the house, particularly cats.  She looked and looked but found no cat.

Or like the Sunday morning Momma and Daddy awoke to find me gone.  They finally spied me in my nightgown, a hat, and gloves on the community swingset.  So happy.  And I even thought of gloves!

Or like the numerous times they had to set the table for 4 to accommodate my imaginary friend, Bobby Cox.  (No, not the coach of the Atlanta Braves – he hadn’t been invented yet.)  They always wondered if Bobby Cox was a boy or girl.  I don’t know either.  I have no memory of any of this, just their repeated stories amidst laughter.

When Thomas Jefferson founded the University of Virginia, he wanted this institution to be free of church influence, to be funded by the general public so less wealthy people could attend, and to offer a full curriculum not offered at other universities.  I don’t think Toddler Psychology was among the choices.

Well, don’t just stand there like a statue, make your way over to Sepia Saturday for more stories.