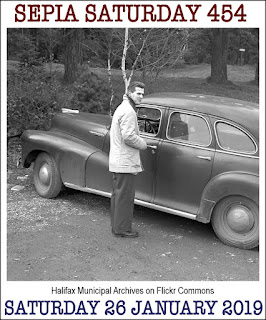 This week’s Sepia Saturday prompt shows a man standing beside one of those 1930s-1940s cars that my family refers to as “jelly bean” or “kidney bean” cars because of the bulbous shape.

Anyone who is obsessed with family history and challenged by trying to identify people in unmarked photos has surely heard of Maureen Taylor, the Photo Detective. She is everyone’s go-to expert on finding clues in old photos. With her instruction, even the casual family historian has learned to pay attention to details like styles of clothing, use of props, and what the photo is printed on.

In my best imitation of the Photo Detective, I decided to try my hand (and eye) at dating photos by studying jellybean cars.

Can you date a photo with just a partial view of a car, specifically the wheel? Why, yes, you can. When I zoomed in, I could read “Statesman Custom.” Hmm, not familiar. With the aid of Dr. Google, I learned it was a Nash, an American car manufactured between 1916 and 1954, and then until 1957 after the creation of the American Motors Corporation. Since I know that adorable child, I used those sturdy walking shoes and balancing fists to narrow down the years the photo was taken to 1952 or 1953. Therefore, the car had to be older than that. 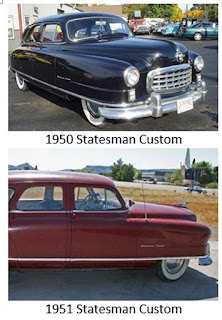 Even someone who doesn’t know the child can date this photo if they pay close attention. As I studied wheel after wheel, I noticed that in early Statesman Customs, the model name appeared closer to the door, not over the wheel like in my photo. Then look what happened in 1952.

The folks at Nash moved the model name over the wheel. 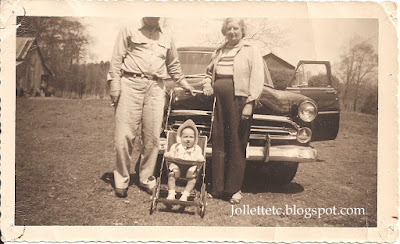 The deckle edge is a sure sign that this next photo dates between the 1930s and 50s, but the car will surely point you to the later years of that range. Knowing these people made it easy to guess the make of this car and year. My father was a Ford man, so I guessed his father was too. The grill, the hill-shaped hood, the vented door window all cry FORD. My grandparents never had much money, so I could not imagine they bought a new car very often. Therefore, I started with 1949. However, from 1949 through 1951, the shape and placement of the fog lights or signal lights did not match my photo. The 1952 Ford however introduced the propeller-looking light mounted on the edge of the grill in a direct line below the headlights. But was it the Mainline, Crestline, or Customline Ford? The answer probably lies INSIDE the car, but I will guess the Mainline, certainly not Customline as my grandparents’ finances probably would not have allowed it.

The ultimate “jelly bean” was my grandfather Orvin Davis’s Buick. I do not know how many cars he owned in his lifetime, but I know this Buick with its iconic VentiPorts and gunsight hood ornament was his last. It was the car he chauffeured me and the neighborhood kids in to buy penny candy at the drugstore. It was the car that carried us across the state every summer to visit my cousins. As a child, I thought it was the biggest, heaviest, and ugliest machine ever imagined. I was probably right.

But I digress - back to my detective work. I tried zooming in to read the name of the model etched across the grill. The best I can decipher is that the word is 5 letters, so that eliminates the Roadmaster. It could say Super. It could say Eight. From what I can tell, they were the same thing, but I find more photos showing “Eight,” so I will go with that.

Since the 1948 Buick Super Eight had more of that jelly bean shape with a semi-fastback style than Granddaddy’s car which had more definition, his car probably dates after 1948. The metal strip on the windshield seems to have been eliminated from the 1950 models. Therefore, it seems likely the car was a 1949 model, and because I know the car was still around in 1963, dating this photo more accurately will require studying the little boy and his clothes.
MY GUESS - 1949 model but photo around 1953

One last jelly bean car is this one. I confess it has given me a fit. Knowing the people, I can say for sure the car dates before 1941 which is the year Violetta’s husband Dick Ryan died. The object of most of my research was this wing-like rear fender. I compared cars from 1935 (they married in 1936). Apparently that wing fender was popular among car manufacturers. 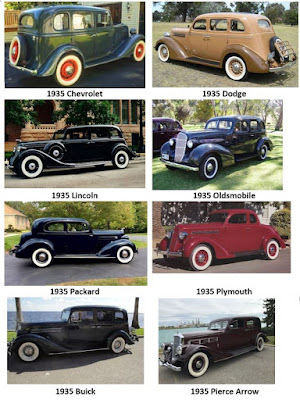 The Chevrolet, Lincoln, and Buick had a rear fender most like the one on Dick Ryan’s car.

Next I tried comparing the small rear window and exterior spare tire holder. The search was hampered by the fact that most of the pictures I found were of cars that have been restored by auto enthusiasts who might have altered the exterior. But for the most part, most cars did not have the same slope as Dick’s car.

Then I remembered I have another picture showing the front of the car.

Once again, like Dick’s car, the front fenders on the Chevrolet, Lincoln, and Buick had the same gentle slope like a sliding board. The other cars’ front fenders were more like a hill with a definite stop where it met the running board.

Furthermore, the shorter length and VERY pronounced vent on Dick’s car eliminated most of the contenders which had narrow vents and long front ends.

But I could find no car with a vent like this one. The very pronounced vent on the Buick seemed somehow related but not an exact match. I was beginning to think the car rehab artists of today may have substituted the vents. I put my research aside for another day.

Then BOOM - just like that, this picture popped up:
Look at the side vents. Look at that slope and spare tire. This has to be the car.

It’s long with a lot of talking. But I sat through it because my grandaunt and uncle had that car: a 1935 Ford Slantback which had NO TRUNK, by the way. The car in the video has not only the very large vent but also the same molded lines around the window and along the slanted back. One of the interesting features of this car shown in the video is the ashtray that spins around like a revolving door. Violetta was a smoker, so she probably liked that.
MY GUESS - 1935 or 1936

I am no Maureen Taylor, but studying the details of old cars has been a fun little exercise for me. Admittedly, there was no new revelation, no new connections to anyone, just little factoids to add to my family history.

Hop in your car and enjoy the ride to Sepia Saturday.