The most obvious bit of inspiration in this week’s Sepia Saturday prompt is the truck.  As a teenager, I viewed trucks as a necessity only for people like farmers, carpenters, plumbers, and delivery people.

But for Homecoming at Cradock High School in the 1960s, a truck was golden.  After all, every club needed one to pull its Homecoming float.  Competition was fierce among the clubs to produce The Most Original, The Most Spirited, or Best Theme.  Anyone who had access to a flatbed truck was sure to be able to produce a worthy welcome for the honored alumni.


The parade route began at the school parking lot on George Washington Highway and then processed onto Gillis Road passing right in front of my house.  Our excitement began to build with the first “rrrrrrr” of the policeman’s siren signaling the parade had started.  Young and old craned their necks to catch the first glimpse of the motorcycle escort followed by cars of dignitaries: the principal, school superintendent, sometimes even the mayor. 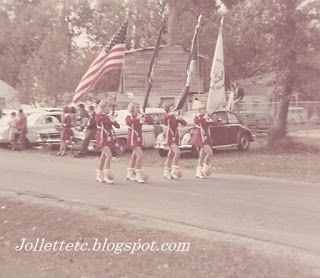 In the near distance we caught flashes of silver sparkle as batons twirled up into the air and down.  The familiar notes of the Cradock Fight song or “Stars and Stripes Forever” wafted through the air as drums, brass, and woodwinds grew louder and stronger with every approaching step of the Marching Admirals.

Convertibles of smiling class or club officers waving offered a momentary sensory break as the crowd anticipated the jewels of the parade:  the floats.

Flatbeds and pickups inched along Gillis Road, almost completely obscured by colorful paper honoring the 10-year reunion of a previous class and promising to Crush the Cavaliers or Tame the Tigers or do WHATever to WHOever dared take on the Admirals on Homecoming.

Too soon the hollow clip clop of horses' hooves meant the parade was over for those of us on my block.  But children often ran alongside the parade for a 60s-version of “instant replay.”  I wonder how many actually followed the entire parade route, turning left onto Afton Parkway, completing the circle back at the football field in preparation for the big game.

Without doubt, the Homecoming Parade was one of the most anticipated events of the year.


Probably the only thing better than a parade passing in front of our house was the honor of having a float constructed in our garage.  I was a member of Kappa, one of three service clubs open to the girls in school.  My house was the designated “float” house for our club.

Each year, I cleaned out the garage, rearranging the lawnmower and paint cans and old screens to make room for our creation.  I’m not sure if my parents were glad for the annual cleaning or annoyed at hosting a gaggle of giggling girls night after night, but they managed to endure three homecoming floats.

For weeks, the living room filled with chatter and laughter as we folded, tied, and separated the layers of tissue to form carnations. Yes, we made tissue flowers from either Kleenex or toilet paper.  Apparently other types of materials for floats had not been invented, were not available, or were too costly for our club.   A tissue-covered truck was the only “look” I ever knew when it came to Homecoming float décor.


Who arranged for the truck I don’t know.  Looking at these photos, I suspect most were "donated" by locally owned businesses that saw it as a way to build goodwill with the community. It was always exciting when the truck showed up in my driveway for the girls of Kappa to decorate.

As for the club competition for outstanding floats, Kappa was never a winner.  Get your camera ready because here comes the parade of winning floats: 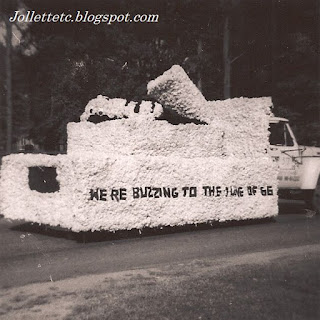 "We're buzzing to the tune of '66."  In 1966 the theme for Homecoming was "Where the Action Is."  The Admiralettes won "Most Original" for a bumble bee playing a record player to welcome back the class of 1956.

(I wonder how many boxes of Kleenex they went through because that's a LOT of tissue paper flowers.) 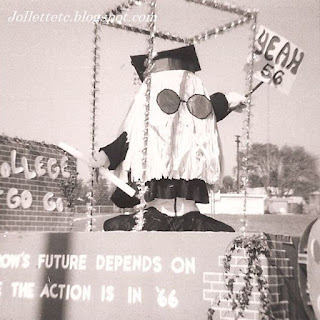 "College I-A-Go-Go:  Tomorrow's Future Depends on Where the Action Is In '66."
It was always hard to outshine the Art Club who won "Best Theme" for creating a paper Cousin Itt to promote going to college. 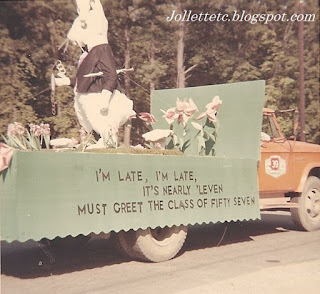 The Art Club did it again in 1967 winning "Most Spirited" with the White Rabbit hurrying to welcome back the class of 1957. The Homecoming theme was "These Changing Times."

(Did you notice the Art Club didn't use tissue paper flowers?  They had access to materials and skills the rest of us lacked.) 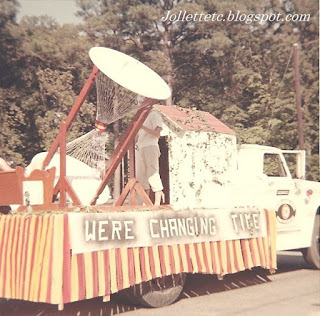 "We're Changing Time."  That same year, the YMCA's creativity was rewarded by the float's being named "Most Original."

Truck on over to Sepia Saturday to see the parade of lovely blogs.