Fielding Jollett - A Decree in the Court of Equity

By 1860 James W. Good and Reuben M. Walton were no doubt tired of waiting for payment on loans made to Fielding Jollett three years prior.  With the aid of their attorney Peter Borst, Jr., the two merchants filed a complaint against my 3G grandfather.

The attorney presented evidence that Fielding Jollett owned 300 acres of land, and that he was in debt to Good and Walton, plus two more farmers George W. Shuler and George Summers.  The complainants acknowledged that Fielding had no personal property that could be sold in order to satisfy the debt, so they asked the Court to sell or rent as much of the real estate as would meet his obligations.

Fielding was summoned to court to answer and plea to the charges, but evidently he did not show up.  Failure to attend court was deemed a confession of guilt. 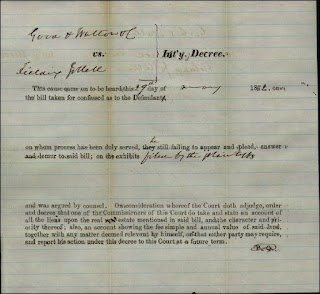 on whom process has been duly served, they he still failing to appear and plead, answer and demur to said bill; on the exhibits filed by the plaintiffs

and was argued by counsel.  On consideration whereof the Court doth adjudge, order and decree that one of the Commissioners of this Court do take and state an account of all the liens upon the real estate mentioned in said bill, and the character and priority thereof; also an account showing the fee simple and annual value of said land, together with any matter deemed relevant by himself, or that either party may require, and report his action under this decree to this Court at a future term.

And so the Commissioner took an account as ordered.  In so doing, he uncovered two more judgments against Fielding’s property, one from Benjamin F. Grayson and one from the estate of Paschal Graves.  When the Commissioner reported back on November 1, 1872, he calculated that Fielding Jollett owed $367.63, which is roughly $7,000 today. 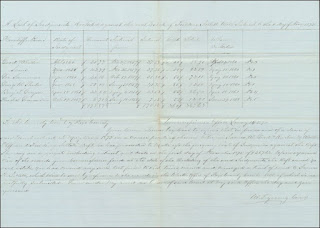 To the County Court of Page County   Commissioners Office Luray 1 of 1872
Your Commissioner begs leave to report that in pursuance of a decree of said Court entered at May term 1872 in a cause pending therein between James W. Good and Reuben M. Walton Plffs and Fielding Jollett Deft he has proceeded to make up the foregoing list of Judgments against the Deft Showing an aggregate including interest and costs on the first day of November 1872 of $367.63.  Upon examination of the records, your Commissioner finds at the date of the Docketing of the said Judgments , the Deft owned no real estate, nor has owned any since, but prior to that time owned and conveyed a tract of land to James F. Jollett, which will be seen by reference to the records in the Clerk’s office of Page County Court.   All of which is respectfully submitted.  Given under my hand as Commissioner of said county at my said Office the day and year aforesaid.
W. T. Young, Commr

While this Chancery Cause “folder” available online at the Library of Virginia website is pretty full with copies of deeds, judgments, complaints, and other evidence, there is no Final decree.  Since Fielding had apparently already sold the land to his son, there was no land to sell to satisfy the debt.  So what the Plaintiffs did then, I don’t know.

But I do know justice was certainly not swift in this case.