Amanuensis Monday: Was It a Dirty Deed?

Amanuensis Monday is a daily prompt at Geneabloggers which encourages the family historian to transcribe family letters, journals, audiotapes, and other historical artifacts.

James Good and Reuben Walton et al won in their complaint against Fielding Jollett for non-payment of debt that had accrued between 1857 and 1872.  However, the Commissioner appointed by the Court to take an account of Fielding’s real estate for the purpose of renting or selling it in order to satisfy the debt discovered two more issues that further complicated the case:  (1) there were two more liens filed against Fielding’s land ahead of theirs dated 1855 from Benjamin F. Grayson and the estate of Paschal Graves, deceased; and (2) Fielding had sold his land in 1859, a year before any of the judgments had been docketed.

The folder of documents contains no indication of how the Court answered the question, “Now what do we do?”  But I do know that Benjamin F. Grayson didn’t shrug his shoulders and walk away.  He cried, “Foul!” and lodged another complaint against Fielding Jollett, known in Chancery Court as “B. F. Grayson vs Fielding Jollett Index #1871-071.”

Let’s begin with Exhibit D, an office copy of the deed of 28 March 1859 between Fielding and Mary Ann Jollett and their son James Franklin Jollett. 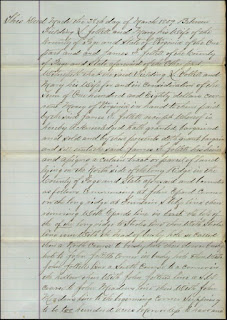 THIS DEED made this the 28th day of March 1859 between Fielding L. Jollett and Mary his wife of the County of Page and State of Virginia of the one part and James F. Jollett of the County of Page and State of aforesaid of the other part Witnesseth that the said Fielding L. Jollett and Mary his wife for and in consideration of the sum of one hundred and eighty dollars current money of Virginia in hand to them paid by the said James F. Jollett receipt whereof is hereby acknowledged hath granted, bargained and sold and by these presents doth grant bargain and sell unto the said James F. Jollett his heirs and assigns a certain tract or parcel of land lying on the north side of the long ridge in the County of Page and State aforesaid and bounded as follows, Commencing at John Epards corner on the long ridge at Fountain S. Utzes line then running with Epards line in bout [sic.] the top of the long ridge to Stroles line then with Stroles line even with the head of bushy hole so called, then a North course to bushy hole then down bushy hole to John Jolletts corner in bushy hole then with John Jolletts line a South course to a corner in the hollow then with John Jolletts line a S. W. course to John Meadows line then with John Meadows line to the beginning, corner supposing to be two hundred Acres more or less to have and 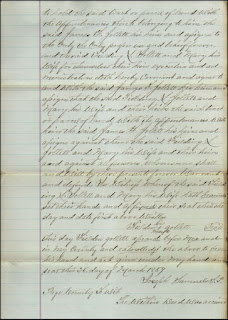 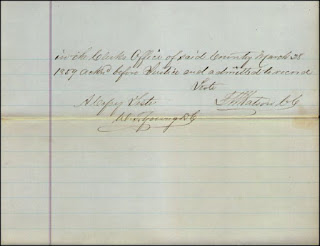 in the Clerks Office of Said County March 28, 1859 Acknd. Before Justice and admitted to record.
Teste: John W. Watson, C.C.