No, that’s not an illness, but no doubt Benjamin F.Grayson was sick over having made a loan to someone who never paid it back.

Fielding Jollett borrowed $22.44 from B. F. Grayson in 1855 and agreed to pay interest until paid plus fifty-five cents in costs.  The judgment against Jollett was filed in 1861.  In 1872 when a Commissioner filed his report on the value of Fielding’s land in the case of Good and Walton et al vs Jollett, he discovered among other things that Grayson was due $46.52, more than twice the amount of the original loan.

That doesn’t sound like much, but if we can trust the online inflation calculator, that equates to about $861 today.


The buying power of $46 was considerable.

Grayson obtained a lawyer by the name of Richard S. Parks and filed a complaint.  In seeking remedy, they acknowledged that Fielding had no personal property from which to extract payment, so they requested he be given five years to make good on the loan after which time the land should be sold if the debt had not been satisfied.

But then the other shoe dropped:  Fielding had already sold his land to his son James Franklin Jollett.

B. F. Grayson didn’t buy that story for one minute.  He filed an amended bill with the Court claiming that Fielding and James Franklin were in cahoots to commit fraud and requesting that both be named as Defendants in the bill. 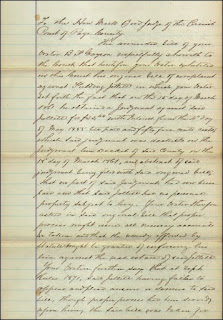 To the Hon. Mark Bird Judge of the Circuit Court of Page County
The amended bill of your Orator B. F. Grayson respectfully showeth to the Court that heretofore your Orator exhibited in this Court his original bill of complaint against Fielding Jollett in which your Orator set forth the fact that on the 15 day of March 1861 he obtained a Judgment against the said Jollett for $22.44 with Interest from the 4th day of May 1855 till paid and fifty-five cents costs; which said Judgment was docketed on the Judgment lien Docket of said County on the 18th day of March 1861, and abstract of said Judgment being filed with original said bill; that no part of said Judgment has been paid and that said Jollett has no personal property subject to levy.  Your Orator therefore asked in said original bill that proper process might issue all necessary accounts be taken and that the remedy afforded by Statute might be granted of enforcing his lien against the real estate of said Jollett.

Your Orator further says that at Sept Rules 1871, said Jollett having failed to appear and plead, answer and demur to said bill, though proper process has been served upon him, the said bill was taken for 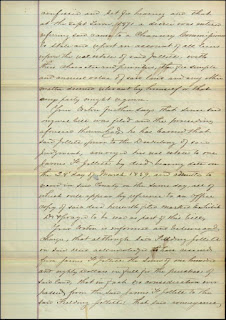 confessed and set for hearing and at the Sept term 1871 a decree was entered referring said cause to a Chancery Commissioner to state and report an account of all liens upon the real estate of said Jollett with their character and priorities, the fee simple and annual value of said land and any other matter deemed relevant by himself or that any party might require.

Your Orator further says that since said original bill was filed and the proceeding aforesaid therein had, he has learned that said Jollett, prior to the Docketing of said Judgment, conveyed his real estate to one James F. Jollett by deed bearing date on the 28th day of March 1859 and admitted to court in said County on the same day, all of which will appear by reference to an office copy of said deed herewith filed marked Exhibit (D), and prayed to be read as part of this bill.

Your Orator is informed and believes and charges, that although said Fielding Jollett in said Deed acknowledges to have received from James F. Jollett the Sum of one hundred and eighty dollars in full for the purchase of said land, that in fact no consideration ever passed from the said James F. Jollett to the said Fielding Jollett; that said conveyance 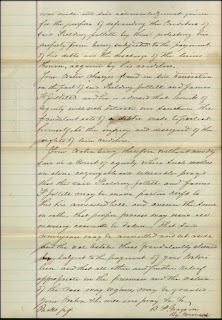 was made and said acknowledgement given for the purpose of defrauding the Creditors of said Fielding Jollett by which protecting his property from being subjected to the payment of his debts and the discharge of the liens thereon, acquired by his creditors.

Your Orator charges fraud in said transaction on the part of said Fielding Jollett and James F. Jollett and he is advised that Courts of Equity will not tolerate or Sanction the fraudulent acts of a debtor made to protect himself, to the injury and disregard of the rights of lien creditors.

Your Orator being therefore without remedy save in a Court of equity where such matters are alone cognizable and relievable prays that the said Fielding Jollett and James F. Jollett may be made parties defts to this his amended bill and answer the same on oath, that proper process may issue all necessary accounts be taken; that said conveyance may be annulled and set aside and the real estate thus fraudulently aliened be subject to the payment of your Orator’s lien and that all other and further relief appropriate in the premises and the nature of the case may require, may be granted your Orator & he will ever pray
B. F. Grayson
By Counsel

Next time:  Did money change hands?