When Alan selected the photo for this week’s Sepia Saturday challenge, he was dreaming of his upcoming luxury vacation cruise.  While I've never been on a cruise, my dad did some cruising in his younger days.

In the Coast Guard.

He enlisted shortly after high school on February 11, 1946, and was honorably discharged May 12, 1947. One year in service to our country must have been the minimum to qualify for the GI Bill enabling him to enroll in college for the fall semester.

Daddy was stationed in Boston, Massachusetts.  He loved Boston and he spent as much of his free time as possible at the Boston Symphony or at Fenway Park watching those Red Sox.  His work as a seaman involved decommissioning four ships.  I suppose that means he was cleaning out drawers and removing cannonballs preparing to spike the cannon.


He was assigned to the USCGC Eastwind, a wind-class icebreaker, considered the most technologically advanced icebreaker in its day.   Icebreakers are special-purpose ships with a strengthened hull and an ice-clearing shape, with power to push through ice-covered waters.

The Eastwind and ships like it were able to drive their bow ONto the ice, breaking the ice under their weight.  The specially designed hull enabled the ship to direct broken ice either around or under the vessel; otherwise the buildup of broken ice could slow it down.


The Eastwind made four trips to Greenland patrolling the waters, but mainly supplying bases there.

I don’t ever recall seeing Daddy’s scrapbook of his time in the Coast Guard until after his death.  So I’m totally without stories about his shipmates and their work, which he faithfully documented in photos.

But the scrapbook reflects Daddy’s personality and the traits that I have come to associate with him.

First of all, he was always sentimental about mothers and children.


He was curious about other cultures. 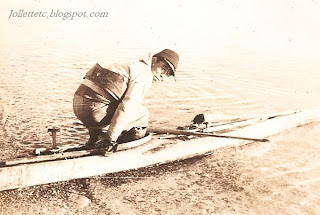 The powerful icebreaker held as much fascination for the Inuit as the kayaks did for Daddy and his shipmates. 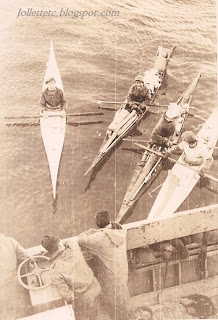 He was in awe of nature’s majesty. 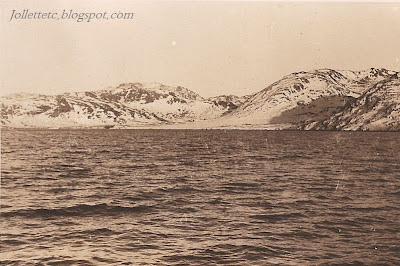 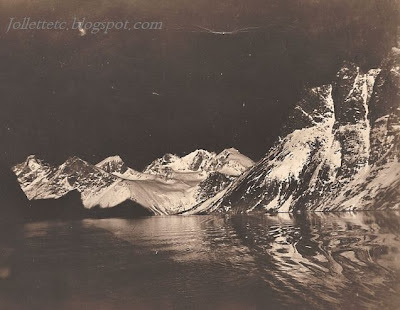 He was always amused by the antics of children and animals.

Skunk was the ship’s mascot.  Although mascots were not officially allowed, most captains turned a blind eye as long as the animal was cared for and boosted morale.  And in typical mascot fashion, Skunk didn’t belong to anyone in particular and would follow along with the men when they went ashore, even to the bars.  The men made sure Skunk sat on his own barstool and drank some beer.  Yeeeaah, I guess there was no PETA chapter in Thule.


Sail on over to Sepia Saturday to see what the crew has to offer.  Don’t be shy - I’ve already broken the ice for you.