Check out this gun:

My mother’s brother Orvin Owen Davis, Jr. was in the Coast Guard during World War II, primarily in the Pacific.  He served on an invasion transport ship which delivered marines and amphibious vehicles to battle zones.  Two newspaper articles saved by my grandmother indicate Orvin Jr. contributed to the success of at least two significant battles.

The first was the Second Battle of Guam (1944) in which the United States took back territory that had been captured by the Japanese in 1941. The article appeared just two days after the conclusion of the battle.

The second was the Battle of Peleliu in the Philippines.  The battle raged on for four months resulting in the highest casualty rate for U.S. military personnel during the Pacific campaign.  The following newspaper article was just a “small world” human interest story about my uncle being on the ship that transported one of his boyhood friends, then a marine, to Peleliu. 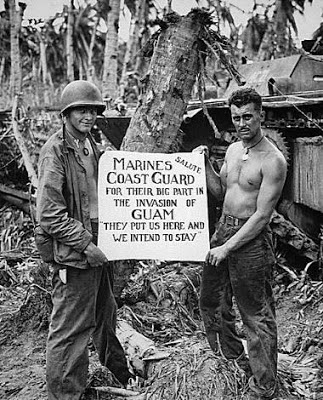 The important role played by the Coast Guard is evident in this photo from Wikimedia Commons.  The photo was taken in Guam, but the sentiment could have been extended to any part of the Pacific theater.


With so many of our participants living in North America, Europe, and parts "down under," you may need an amphibious vehicle to make your way around Sepia Saturday.