I don’t know what to say about my 3X great-grandfather Samuel WILLSON except that he lived in Rockbridge County, Virginia, and he was the father of my 2X great-grandmother Martha Ann WILLSON.  It says so right here on a marriage bond: 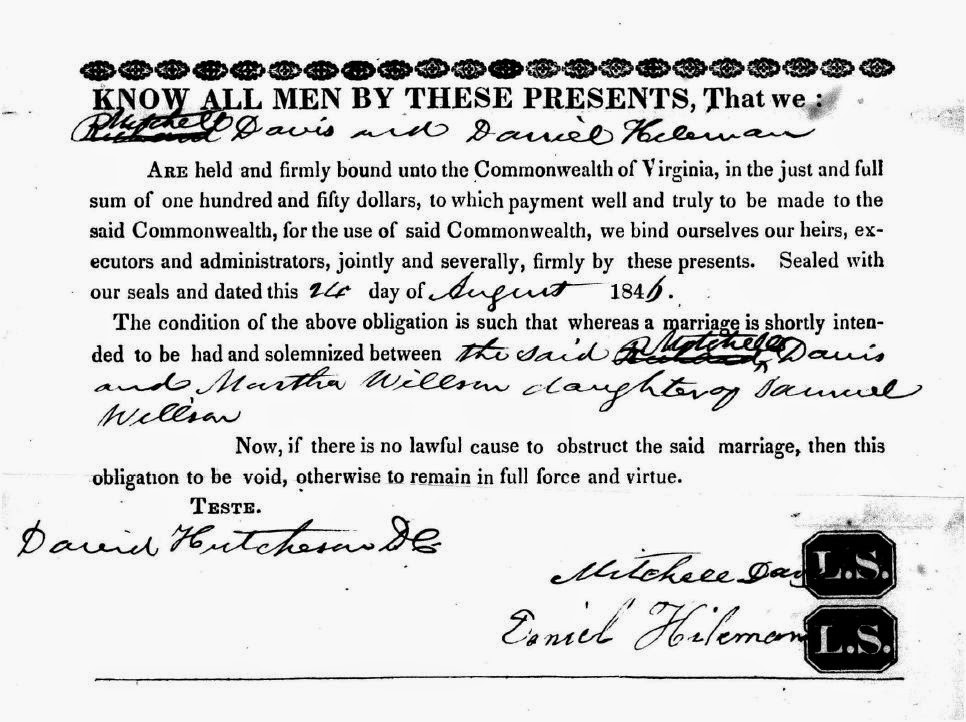 Beyond that, Samuel is still a mystery.  I’ve contacted a number of potential cousins with WILLSON trees on Ancestry.com, but none will claim Martha.  It’s still possible that she belongs to one of them too, but they just don’t know it yet.  After all, she was born in 1833 and was married at the ripe age of 13, so she was out of the family home before all members of the household were ever named in a census.  Without a census list or a will, we family historians can’t always complete the picture of our ancestors.

I spent a couple hours in the Rockbridge County courthouse grabbing whatever I could find that included the name Samuel WILLSON.  Unfortunately that wasn’t enough time to go through every book in the deed room.  Three deeds though looked promising.

The first was the sale of property in 1818 inherited by Samuel and Elizabeth WILLSON and her siblings.  The date seemed reasonable.  The bonus was getting a potential mother along with the maiden name, Hannah.  But wishing doesn’t make it so as I quickly learned upon searching this line in Ancestry.com.  THIS Samuel Willson turned out to be a minister whose descendants conducted lots of research.  Had Martha been in this family, surely her own father would have married her and Mitchell Davis; however, she reported in her widow’s pension application that the minister was Reverend Thomson.  So I crossed this Samuel Willson off my list of possibilities. 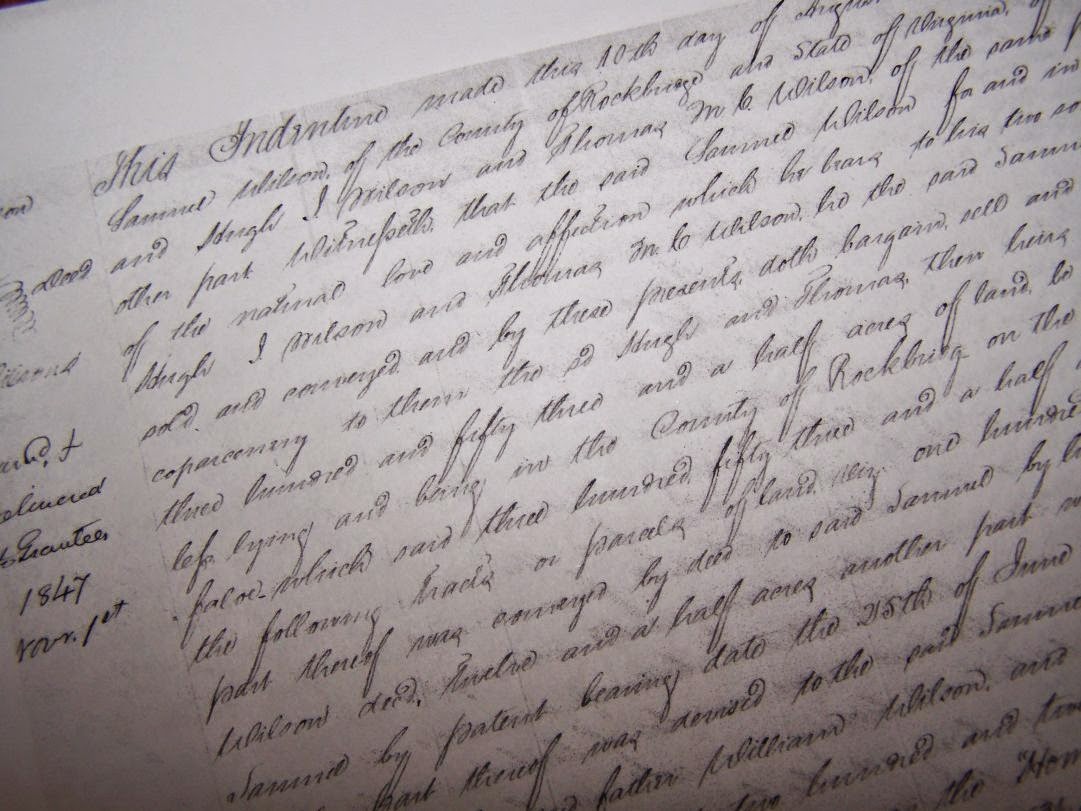 The second deed is inconclusive.  In 1847 Samuel Wilson conveyed about 353 acres of land “for natural love and affection” to his sons Hugh J. Wilson and Thomas M. C. Wilson.  Part of the land had been patented to Samuel in 1800 and part had been deeded to him by his father William, deceased.  The land bordered the property of James Wilson.

Even though that gives me more names to search, surprisingly enough, the names even present a problem.  The indices of the deed books promise some consistency in separating the WiLsons from the WiLLsons. 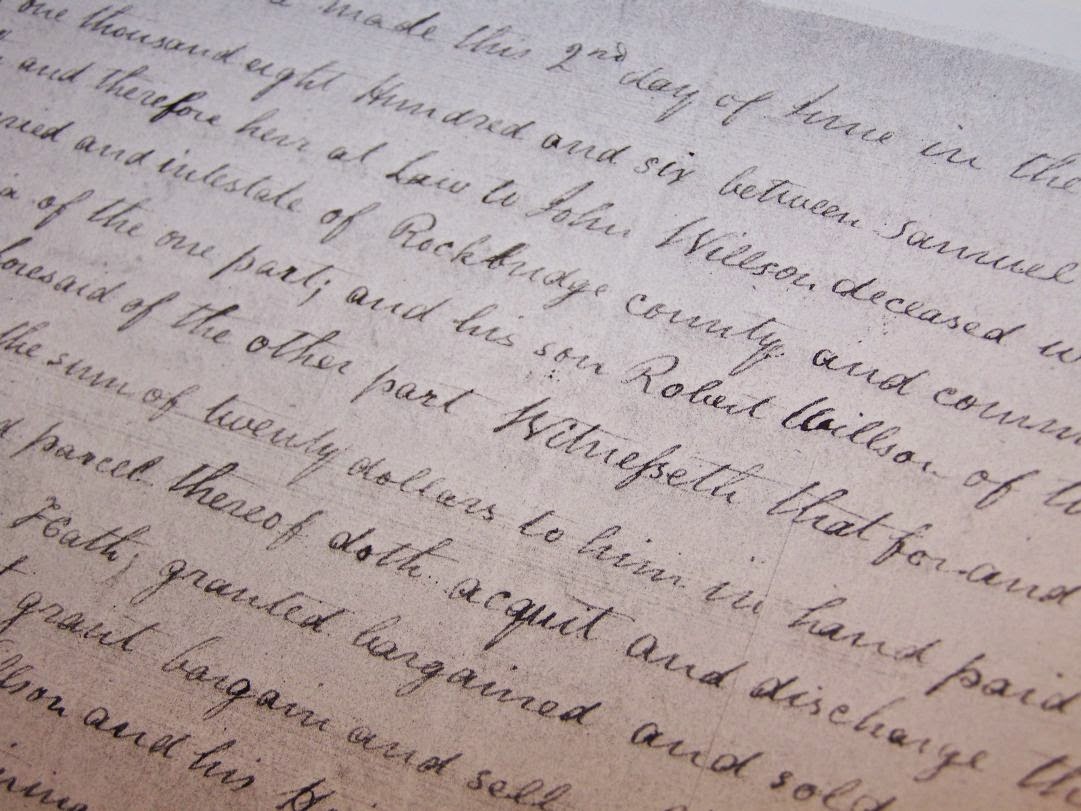 However, since at least one household had both spellings in the family list in a census, I still have hope that this deed holds a possible connection to my Samuel and Martha.  I’m even more hopeful when I add a deed from 1806 to the mix. That year Samuel WiLLson was heir at law to his son John who died unmarried and intestate.  He sold 9 acres of John’s land to another son named Robert.  The metes and bounds description indicates the property bordered that of Samuel AND Hugh WILLSON.  A few mathematical calculations indicate this is NOT the same Hugh Wilson from the 1847 deed.  Furthermore, it’s not likely this Samuel could be my Martha’s father at all, but possibly he could be her grandfather; if Robert was purchasing land, he must have been born by 1786 making Samuel born by 1766.

So what I have observed is this:

Email ThisBlogThis!Share to TwitterShare to FacebookShare to Pinterest
Labels: Willson