Another ancestor in my “imagined” family is Mary Jollett, born in Culpeper County, Virginia in 1750.  I say “imagined” because she HAS to be related to my known Jolletts, but I just don’t know how.  For now she’s an asterisk in the family tree, possibly a daughter of James and Gracey, possibly sister to Thomas, or – perish the thought – none of the above.

What is known about Mary is that at the age of 18 in 1768 she married John Dodgens Forrester, also from Culpeper County.  Supposedly they had 9 children, but a comparison of Forrester family trees on Ancestry reveals conflicting names and dates – surprise!  Would a Jonathan, James, and Joel all die on the same day in New Orleans?

Ignoring the fine details for now, I think I have a fairly good handle on Mary and John’s family.  In the late 1700s they moved to Wilkes County, North Carolina.  The reason is unknown, but I have a theory.  Following the Revolutionary War, the American Treasury was in bad shape.  Unable to pay the Continental Army, the government granted land to many of the soldiers.  John had served, as evidenced by Mary’s application for a widow’s pension, but I don’t know whether he would have been offered land out of his state of service.  What do I know?  At any rate, they were there, as were other Forrester families.

The Forresters and several adult children and their families can be located in Wilkes County census records at least through 1810. 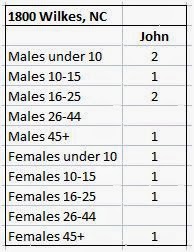 After that time, they joined the western migration.  North Carolina’s leaders were notorious for refusing to spend tax money on any form of economic advancement, schools, or roads.  The State did nothing to educate farmers about the importance of crop rotation, and as a result farmland suffered and poverty spread.  Eventually the most populated state in the union was decimated as citizens just gave up and headed west where they easily found cheaper land to farm at a profit.

One stop along the way was Robertson, Tennessee.  Robertson’s claim to fame was its whiskey production and strong tobacco industry.  Considering that tobacco has long been king in North Carolina, I wonder if John and Mary were tobacco farmers.

By 1820, Mary and at least some of her children and their families settled in White County, Illinois.  Each census from 1820 to 1840 pictures the Forresters, DeBoards, and Bolerjacks as near neighbors.  I suppose Mary lived with one of her children because she does not appear as Head of Household until 1830.

But is this the right Mary?  The one female is entered in the age 50-60 column; MY Mary would have been closer to 80.  It is more likely she was living with her daughter Lucy and son-in-law John BOLERJACK since there is a woman listed as 80-90 in that household.

Then in 1840, the Bolerjacks list a woman aged 90-100.  The age fits Mary’s timeline according to most Forrester researchers.

Mary’s exact date of death is unknown although it is assumed she died before 1850, maybe about 1848. She applied for a widow’s pension in 1847 but was denied on grounds of failure to prove John Dodgens Forrester had ever served during the Revolutionary War.  (Doing the math, it seems unlikely any of his comrades would have still been alive to vouch for his service.  Plus they were many miles and several mountain ranges away from their home state.)

A quick look at the 1940 census shows the Forresters, Bolerjacks, DeBoards and other related families were still a strong presence in White County and other parts of Illinois.  While I might not know for sure how Mary Jollett Forrester is related to me, it’s still amazing to see how far that Jollett DNA has spread.