Sepia Saturday: To Mercersburg and Beyond

This week’s Sepia Saturday prompt depicts the world’s leaders at the Potsdam Conference.  Those men in their dark suits gathered around the peace table at the end of World War II make for an imposing presence.   What a contrast to my merry band of vacationers in white gathered around a picnic table 17 years earlier.

These same people appear in a number of photos dated August 1928 in a scrapbook that belonged to my great-aunt Velma Davis Woodring.

Velma’s good friend Olive is identified in one photo and featured prominently in others,


and one photo identifies a lone subject as “Mr. Williams.” 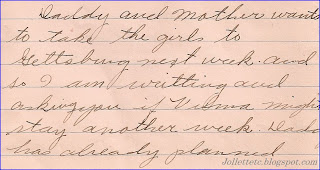 Daddy and Mother wants to take the girls to Gettsburg [sic] next week and so I am writting [sic] and asking you if Velma might stay another week.  Daddy has already planned 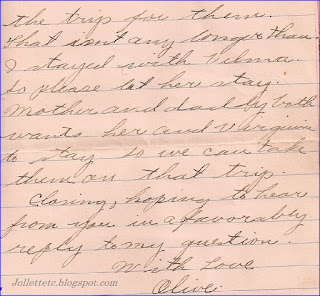 the trip for them.  That isn’t any longer than I stayed with Velma.  So please let her stay.  Mother and daddy both wants her and Virginia to stay so we can take them on that trip.
Closing, hoping to hear from you in a  favorably reply to my question.
With love,
Olive

The purpose of the visit in 1928 appears to be a simple vacation.  Velma and Woody had been married little more than a year.  Summer was quickly coming to a close and Velma would no doubt start teaching school in the fall.  So why not go for the gusto and take a road trip to see her old pal Olive in Martinsburg, West Virginia.

It appears Mr. Williams had planned another trip for the girls – this time to Mercersburg Academy in Pennsylvania.


But why Mercersburg Academy?  I have no clue.  It was not Velma’s alma mater, nor Olive’s.  Velma’s husband had attended college, but I believe he went to Shepherd College (now University), not Mercersburg.

Maybe the beautiful chapel simply attracted tourists just as visitors to Colonial Williamsburg enjoy a stroll through the campus of William & Mary despite having no ties to the school.


Whatever the reason, it’s quite clear that Velma was excited about seeing Olive again, and she wanted to remember the day with lots of pictures.

Just studying the photos to make sense of them increased my curiosity about Olive Williams.  So I did what any amateur genealogist would do:  I plugged her name into Ancestry, guessed at a birth date of 1908, same as Velma’s, and entered Martinsburg, West Virginia as a residence.  A family tree appeared.  And there it was - a picture of Olive.  Those dark eyes are so distinctive that I was fairly certain I had found her.

Census records for the Williams family showed three girls, a match to one of the August 1928 photos.

The contributor is still active on Ancestry, so I sent an email seeking confirmation that I had found my great-aunt’s good friend.

Bingo!  As it turns out Olive’s granddaughter did not recognize Velma’s name, but she called her aunt who actually remembered Velma as Olive’s “great friend.”  She even has the elephant teapot that Velma gave Olive for her wedding to Harry “Moe” Keiter in 1930.  (Elephant teapot!  That sounds like Velma.  I wonder if the tea flowed through the trunk.)

Through the miracle of our “virtual roundtable,” faces once hidden from the camera turned to reveal themselves more clearly.

Please gather at the Sepia Saturday roundtable of blogs.  We promise not to turn our backs on you.