Sepia Saturday: In His Own Write 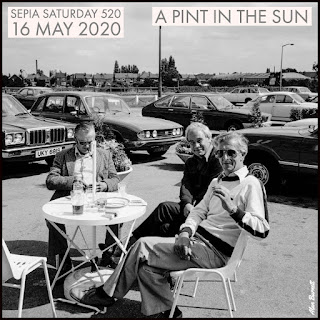 This week’s Sepia Saturday photo of 3 gentlemen enjoying a pint in a car lot made me wonder about the back-story. Was this a business meeting? Were they winding down after work? Perhaps they were college chums planning a class reunion. That is something my dad might have done as a member of the Portsmouth Cavalier Club of the University of Virginia. Most large cities had a version of the Cavalier Club for socializing and networking.
Apparently, that was not the only “club” my dad joined while a student at UVA. The boxes of STUFF retrieved from my grandparents’ attic after 70 years contain clues to a time in Daddy’s life that I knew nothing about. The first hint was this Absence Excuse Form that he filled out on March 27, 1950. His instructor Captain Kuhn had accused him of missing 3 classes in Military Science. Daddy argued successfully that he had been present and even participated in oral recitation.

Surprise aside, I love seeing my dad’s handwriting – that distinctive capital F and lower-case e. And the polite formality of his tone – that is FRED SLADE all day long.

Then there are these letters to the love of his life – my mother, by the way – sent from Fort Eustis, an Army training facility between Williamsburg and Newport News, Virginia. His return address is written boldly covering the entire reverse of the envelope: 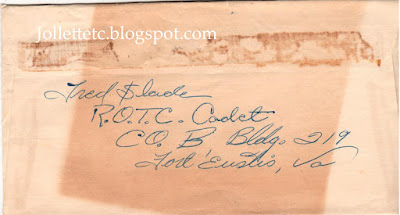 I also did not know he called my mother “George.” 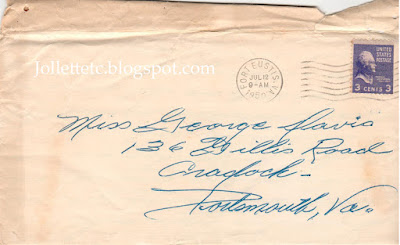 Oh, to learn the story about that!

In his letters, Daddy tells a little about his life as a cadet. 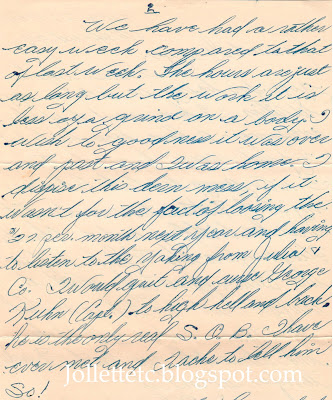 We have had a rather easy week compared to that of last week. The hours are just as long but the work it is less of a grind on a body. I wish to goodness it was over and past and I was home. I dispise this dern mess, if it wasn’t for the fact of loosing the $27 per month next year and having to listen to the yaking from Julia & Co I would quit and curse George Kuhn (Capt.) to high hell and back. He is the only real S.O.B. I have ever met and I ache to tell him so!
NOTE: Yes, the same Capt Kuhn that reported Daddy for missing 3 classes. I suspect Kuhn had the same low opinion of Cadet Fred Slade.
“Julia & Co” – Julia is his mother; “& Co” could be his father OR the string of Julia’s many sisters 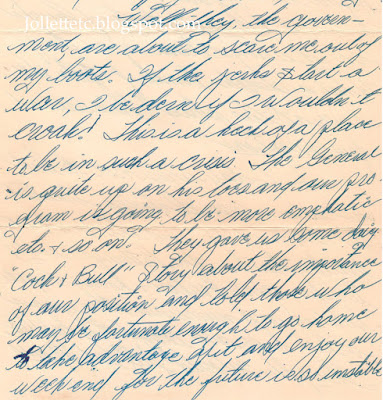 Well, they, the government, are about to scare me out of my boots. If the jerks start a war, I be dern if I wouldn’t croak! This is a heck of a place to be in such a crisis. The General is quite up on his toes and our program is going to be more emphatic etc. & so on. They gave us some big “Cock & Bull” Story about the importance of our position and told those who may be fortunate enough to go home to take advantage of it and enjoy our weekend for the future is so unstable 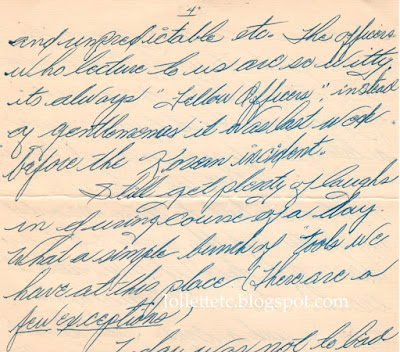 and unpredictable etc. The officers who lecture to us are so witty, its always “Fellow Officers,” instead of gentlemen as it was last week before the Korean incident.
Still get plenty of laughs in during course of a day. What a simple bunch of tools we have at this place. (There are a few exceptions)

I can hear him. No matter the nature of an experience, whether it was a happy time or a fearful one, he relayed it with a mix of philosophical reflection and sarcasm. And laughter. He would have been laughing while writing.

The college yearbook for 1950 confirms that Daddy was in the First Year Advanced Class of the Army ROTC. While there was also a First Year Basic Class, maybe his time in the Coast Guard had qualified him for the Advanced Class. As his letter indicated, he joined for the money probably supplementing the $75 he was already receiving through the Veterans Administration.

The Battalion History on UVA’s website clarifies some of what Daddy wrote about in his letters. The ROTC program at UVA was only a year old when he joined. It was started in response to the Cold War. The detachment was part of the Transportation Corps. The cadets attended summer camp at the Army Transportation Center at Ft. Eustis where they trained on trucks, ships, locomotives, and other types of equipment. There were over 500 members of the Army ROTC battalion at UVA during the 1950s.

I doubt Daddy stuck around for a second year of ROTC. He and “George” got married. While Momma worked in the Bursar’s Office, Daddy was a full-time student taking temporary jobs here and there driving a cab or working at a snack bar. I think that’s what it was. However, there are no bits of paper in the attic treasures to say.

Pull up a chair and pour yourself a pint as you enjoy more stories and old photos at Sepia Saturday.