Sepia Saturday: Is She or Isn't She? 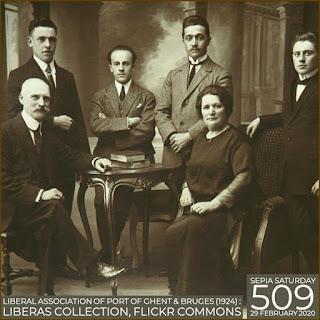 This week’s Sepia Saturday photo prompted me to consider cabinet cards and group photos. One photo that I have NOT written about before is neither.
When I was given this picture (actually a picture of a picture), I was told the couple might POSSIBLY be my great-great-grandparents George Harvey Eppard and Segourney Shiflett.

My grandmother did not talk much about her grandmother, but I clearly remember when she said her grandmother’s name was Segourney. I laughed. I thought she made it up. Since then I have found plenty of women with that name. But I digress. Back to the story.

I am not totally convinced this photo is from the 1870s. The woman’s dress still sports signs of Civil War-era fashion, most notably the dropped shoulder seams. But they did not live in France. They were not wealthy people with a closet full of ball gowns in the latest style. Maybe she wore what she had, regardless of trend.

Segourney was identified in another photo of a photo.
The two older women were Segourney’s mother Susan Jordan Shiflett and Susan’s daughter-in-law Jenetta Dovel Shiflett, wife of Segourney’s older brother Philip Pendleton Shiflett. The tall girl in the middle SUPPOSEDLY is Segourney, according to the distant DISTANT cousin who sent it.

However, I have my doubts. Does she look like the girl in the first photo? Eh ~ I can see a possible resemblance but not enough to say for sure.

Some important dates will help determine the date of the photo:


But if it is Segourney, then who are the other girls? The pose with all those little girl hands on the women’s shoulders is a strong suggestion that they are mother and daughters and granddaughters. Therefore, it does not seem likely that Segourney would be included in the photo.

If the picture were taken closer to 1880, then there should have been 6 young daughters. The oldest, Alpharetta, would have been 20, but the oldest “daughter” does not look that old. So probably the photo was taken earlier than that.

If the picture were taken in 1870, we are getting closer, but Jenetta had only 4 daughters then, not 5.  When the census taker came around that year, the youngest girl was only 2. Jenetta might have been pregnant with her next child.

So looking at Jenetta’s first 5 daughters, I had to wonder if the assumed ages would make sense for a time period between 1870 and 1875. I think it does. In 1873, the girls would line up like this:
These ages seem to fit the girls in the picture, although, quite honestly, I cannot tell which one is Ella and which is little Jenetta.

Therefore, yes, I do believe the tall girl has been misidentified. It is more likely she was Alpharetta, not Segourney who would have been a married girl by 1873 anyway.

I can still hold out hope that these two handsome people staring back at me are my 2X great-grandparents George and Segourney Eppard. 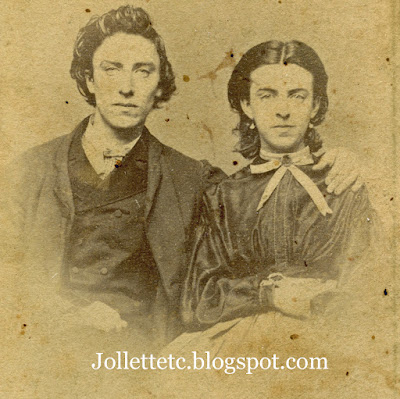 Joint the group at Sepia Saturday.