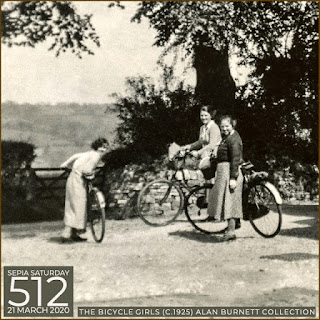 This week’s Sepia Saturday prompt captures a moment many of us have experienced – the simple pleasure of pedaling away on a bicycle to some place new with wind in our hair. Some would say there is no better place to bike than on a boardwalk at the beach.

In 1944, my grandaunt Lillie Killeen joined some friends for a day at Virginia Beach. Biking the boardwalk was on their agenda.

I wish I knew the names of her friends. The woman was probably a coworker, a nurse for Dr. Vernon Brooks. Lillie was his bookkeeper.
The man NOT dressed for the beach was Lillie’s long-time boyfriend. She eventually broke it off with him because, according to her, he drank too much. Lillie never married.

It seems fitting that Lillie is pictured here with the bicycle which years earlier had become a symbol for women’s independence. Think about it. For years women depended on men for transportation, but a bicycle gave women freedom. A bicycle did not require a chaperone.

Fifty years before this photo was taken, the bicycle changed women’s lives. Bicycling and the women’s movement became intertwined. Many suffragettes pedaled their way from town to town gathering support for women’s rights and eventually the right to vote. Susan B. Anthony once said that bicycling had “done more to emancipate women than anything else in the world.”

In a time when women were expected to marry and raise a passel of children, Lillie stood apart. If anyone pitied her, she was quick to point out that she was the lucky one. She didn’t have to come home and cook dinner for a man. She could take off for the weekend on the spur of the moment without having to see to anyone else’s needs.

Lillie especially enjoyed her overnight trips aboard the “Baltimore Boat.” Old Bay Line offered overnight service between Norfolk and Baltimore.
On many Fridays, Lillie dined and danced her way to the big city. Hers was a fun and carefree life that her sisters could not know because of their obligations to husbands and children.

Lillie and others like her just might have a bicycle to thank for such freedom and independence.

Pedal on over to Sepia Saturday for more old photos and stories.