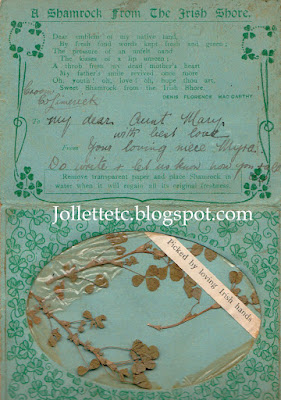 My favorite “new to me relative” is Myra Sheehan. The minute I saw the St. Patrick’s Day card signed “Your loving niece Myra,” I knew for sure that my great-grandmother Mary Theresa Sheehan Killeen Walsh had family still living in Ireland. Myra’s last name was Sheehan, signaling that Mary Theresa had a brother. I wanted to know more about this branch of the family, but I was almost convinced finding them would be nearly impossible. I asked Dara of Black Raven Genealogy whether it was even worth trying to research this family with so little to go on. She asked me a few questions, and surprisingly came back with two census records plus a baptism record for Myra’s father. Voila – the Sheehan family.

Myra’s father was Denis Sheehan. He was apparently the third child born to Daniel Sheehan and Bridget Gorman of Castletown District, County Limerick, Ireland. His birthdate was May 13, 1866, and he was baptized in the Ballingarry Diocese of the Catholic Church on May 20 of that year. The record was written in Latin, so his name appears as Dionysus. The sponsors were Thomas Gorman (maybe a brother to Bridget) and Honoria Grady. These two were sponsors at the baptism of several of Denis’s siblings as well.

About 1891, Denis married a woman from County Tipperary named Alice. In the 1901 census for Croom in County Limerick, Denis and Alice had 4 children: Mary age 7, Daniel age 4, Margaret age 3, and Honoria age 9 months. Denis was a stone and brick mason. He and Alice both spoke Irish as well as English, while the children spoke only English. If Denis spoke Irish, then I can safely assume that my great-grandmother Mary Theresa did as well.

In 1911, Denis and Alice reported they had been married 20 years and that 6 of 8 children were living:  Myra (Mary) age 17, Daniel age 14, Gretta (Margaret) age 13, Rose (Honoria) age 10, Denis age 9, and John age 6. The four older children spoke both Irish and English. Denis was still a brick and stone mason.

The 1901 and 1911 census records in Ireland are so interesting for the added details about the houses and out-buildings. Myra’s family home was described as having either stone, brick, or concrete walls instead of mud, wood, or other perishable material. Likewise the roof was either slate, tile, or iron, not anything perishable like thatch or wood. Their house had 5 or 6 rooms with 3 windows facing the street. As such, the house was considered a 2nd class house, with houses rated between 1st class and 4th. They also had a piggery and fowl house. The landowner for the Sheehans’ home and for most of their neighbors was Earl Dunnivan.

The census records make me think this family did fairly well. At least they were not living in a house made of perishable materials, and everyone had at least some basic education since all of them could read and write.

Somehow Myra kept up with her aunt Mary Theresa who left Ireland about the time Myra was born. While I am so glad to have this little outline of a family, I would like to know more. I wonder how well they knew one another. Was Myra the spokesperson for her father? Or was he already deceased when she sent the St. Patrick’s Day cards? What became of Myra and her brothers and sisters?