I’ve been collecting documents for membership in the DAR through Leonard Davis.  But it’s not easy.  The good news is that Leonard has been proven as a patriot, but since someone joined through a different descendant, my work is still cut out for me.

For whatever reason, “Leonard” was a popular name among Davis boys.  Letters to the Department of Pensions dated as far back as the 1920s reveal the mystery of my Davis line and the misinformation that has been perpetuated on public family trees on websites like Ancestry.com.  Everyone’s story begins the same, but then in some sort of genealogical schizophrenia, the life of Leonard Davis becomes two (or more) entirely different versions.

No matter which Leonard someone descends from, the stories begin with the facts that were spelled out in Leonard’s application for a pension based on his service during the Revolutionary War:  (1) he THINKS he was 19 in 1781 (making his birth year approximately 1761 or 1762), (2) his father moved to North Carolina, (3) Leonard was born in Albemarle County but moved to Rockingham County around 1813.

Most people who refer to Lewis Cave Davis as their first Davis in America tell the story of how he was one of seven brothers who emigrated from England.  Five were killed during either the Revolutionary War or War of 1812.  But when they rattle off the list of Lewis’s children, everyone parts ways.

Page 517 of "The Boone Family, A Genealogical History of the Descendants of George Boone" says Lewis Cave Davis was father to Leonard born in Pennsylvania and that Leonard was father to three children: Matthew, Augustus Cave and Doris who married John Watts.  A website has a Leonard Davis born 1762 and died 1817 who married Mary Ballard of York, Virginia. It lists their FOUR children: Matthew, Augustus Cave, Louis, and their sister who married a Watts.  But this husband of Mary Ballard has also been recorded as born in 1742 and a veteran of the French & Indian War, making it impossible to be the same Leonard Davis who applied for a pension in 1833.  Some versions have Leonard moving to Kentucky, but I know there was a Leonard Davis in Rockingham County, Virginia until his death before 1840.  Another version claims Leonard was BROTHER to Augustus Cave, not father.  Birthdates suggest that such a scenario is at least possible.

Two entries in the Albemarle County Deed Book 9 in 1784 echo some familiar names:  Ballard, Watts, Augustine which is rather close to Augustus.

So there must be some element of truth to the various versions of the life and times of Leonard Davis.  Maybe the players are just not aligned correctly.  Maybe there’s another generation of Leonards.  Maybe ….

Anyway, my contribution to the confusion is this:  “MY” Leonard Davis was married to Mary Marshall – MRS. Mary Marshall according to their 1788 Albemarle County marriage record, so she evidently was a widow.  Whether she was his first wife or second is not clear since there is also a marriage record for a Leonard Davis and a Susannah Burrows dated 1776 in Orange County, Virginia.  There is a small handful of known children, but maybe there were more.  Maybe they were children of Susannah or maybe of Mary Marshall, who knows. 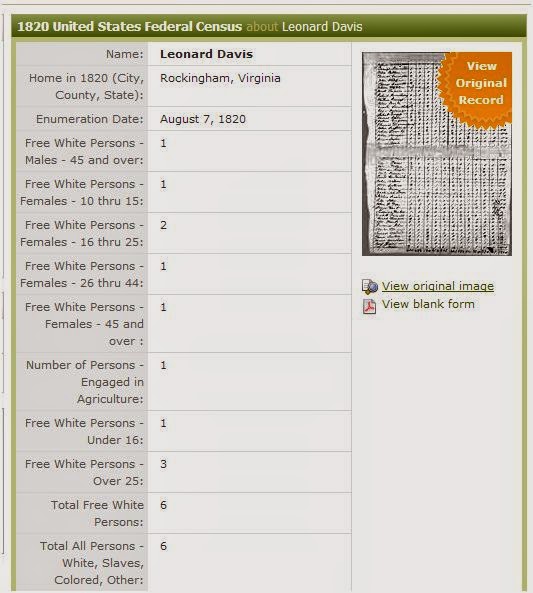 Leonard does not appear as head of household until 1820, which matches information given in the pension application.  Besides Leonard and his wife Mary, there were 4 young females between 10 and 44.  Three are possibly known daughters Sarah, Mary Polly, and Elizabeth.  Leonard Jr. had already married and was head of his own household. 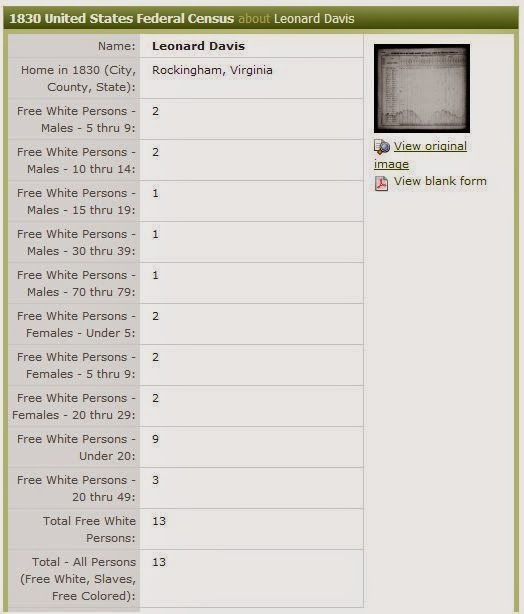 In 1830 Rockingham County, the head of household was likely Leonard Jr. with his wife Frances.  The older male was probably Leonard Senior.  The rest appear to be children of Leonard Jr. and Frances.  Leonard Sr.’s wife Mary was likely dead by then.

In 1840, Leonard Sr’s name appears as a Pensioner of the Revolutionary War, age 79.  However, he was not a head of household, and he was not enumerated in Frances Davis’s household either (Leonard Jr’s widow).  It is likely that is where he was, but since the pensioner information is on a second screen, it is difficult to determine how the images align.