This week’s Sepia Saturday prompt commemorates the Great War, World War I.  A particular second cousin twice removed has always held a certain fascination for me although I don’t know why.  I never knew any of his family and I know very little about him.  Heck, I don’t even have a picture. 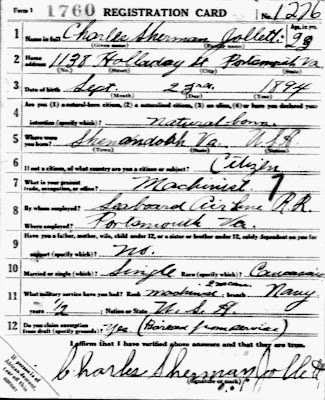 His name was Charles Sherman Jollett, the only son and middle child sandwiched between two older sisters and two younger sisters.  The son of Charles Belsin and Nannie June Fogg Jollett was born in Page County, Virginia on September 22, 1897, even though his World War I draft card says September 23, 1894.

Charles Belsin Jollett was a machinist who sought better opportunities for his family, so they moved to Portsmouth, Virginia some time before 1905.  Sherman followed in his father’s footsteps as a machinist for the Seaboard Air Line Railroad.  Saying “Air Line” and “Railroad” in the same breath sounds funny, like a contradiction, an oxymoron, a paradox.  But in the days before air travel was common, “air line” was a term used to indicate the shortest distance between two points.  Thus railroads often used “air line” in their names to suggest their routes were shorter than road travel.

Now this is what confuses me:  according to his World War I draft card dated 1917, Sherman had served as a machinist in the Navy for a half year.  Nevertheless, he was claiming an exemption from the draft.  The reason he gave is difficult to read, but it appears to say “Barred from service.”

OK, I understand that the military wouldn’t want someone who had an arrest record, didn’t meet weight requirements, had a personality disorder, or proved to be otherwise unsuitable for service.  However, Sherman was gassed during the Great War so he must have served anyway.  How did that happen?

Anyway, according to family lore, Sherman was never the same afterwards.  He continued to work as a machinist following the war, but he lived with his parents, at least until 1925, the last time his name appears in a city directory.  Sadly, in the 1930 census, he is listed as a patient at St. Elizabeth’s Hospital in Washington, DC.


Not familiar with St. Elizabeth’s?  You probably saw part of the west campus in “A Few Good Men.”  This hospital has the distinction of being the first large-scale, federally run psychiatric hospital in the United States.  The doctors there pioneered the lobotomy, studied the effects of race on mental illness, and tested “truth serums” during World War II.


Exciting times at the insane asylum!

In the 1940 census, Sherman was a patient in the Veterans Administration facility in Salem, Virginia, an institution for “nervous and mental diseases,” according to the enumerator’s notation at the top of the page.  The 1940 document is full of interesting information.  For one, it indicates that Sherman was living in a “Govt Inst” in Washington DC in 1935, likely still at St. Elizabeth’s.

It seems Sherman had only a sixth grade education.  He was listed as Single even though he was listed as Married in the 1930 census, a “fact” I believe to have been entered in error, and one that warrants further investigation.

Another surprising bit of information is the listing of patients’ occupations.  I wonder if that means their “usual occupation” or if they continued to work even though hospitalized.  Sherman is listed as still a machinist for the railroad.

I suspect poor ol’ Sherman was under long term care most of his life.  He died in 1957 while a patient at the Veterans Administration Hospital in Hampton, Virginia.  He is buried in Olive Branch Cemetery in Portsmouth.

For more stories of soldiers and the Great War, march on over to Sepia Saturday.