Nothing says “Summer” like a flurry of wedding gowns suggested by this week’s Sepia Saturday photo prompt.

Somehow I managed to have bridal showers, a bridal luncheon, and a beautiful traditional church wedding and reception without the aid of gift registries, The Knot or “Say Yes to the Dress.”  I didn’t interview a host of caterers, photographers, florists, or bakeries.  Bachelorette parties were unheard of. No one that I knew ever had their make-up done professionally.  We certainly didn’t go for a mani-pedi, let alone a spa day.  I bought one Bride magazine and never tried on a single wedding dress.

That was 1973.  It was a given that my mother would make my wedding gown.  After all, she made everything else from school clothes to doll clothes, to slipcovers and drapes.  By 1973, Momma was a seasoned wedding gown seamstress, having crafted two gowns already.


Her maiden voyage into the world of bridal gowns was in 1966.  I don’t recall the circumstances that led my friends and me to spend an afternoon with our Latin teacher, but Miss McFarling was chatting excitedly about her plans for her upcoming wedding.  When she mentioned that she was looking for someone to sew her wedding dress, I volunteered my mother.  Really, I thought it was no big deal to make a wedding gown – just a dress with a longer length, right?  I doubt Momma was THRILLED with my teacher’s request, but she put on a good show.  My sister remembers Miss McFarling coming to the house in the evening for fittings, but I don’t.  All I recall is that I had to grade all of Momma’s spelling tests, reading quizzes, and grammar exercises.  That was either our trade or my punishment, not sure which.

The dress itself was very simple and very 1960’s.  The A-line gown was made from white peau de soie with long, tight sleeves that ended in a point over the bride’s hands.  At the wrist were covered buttons and loops.  The train was attached at the shoulders and contained the only adornment – lace medallions sewn randomly.

Void of any frou-frou, this wedding dress was dramatic in its simplicity (certainly worth an A in Latin).

In 1971 Momma made the wedding gown for the daughter of Momma’s high school buddy and life-long friend.  Unfortunately I have no pictures to share or stories to tell, so let’s move on to dress #3 -- MINE.


My gown had that typical 70’s granny dress look:  empire waist, ruffled hem, and full sleeves with wide cuff. Believe it or not, it was inspired by a picture in Bride magazine.  (See, they even thought it was a good look!)  Momma did her best to replicate it, but that required pulling together parts from various patterns and then creating her own pattern for the train, which really was more of a sweep than full-fledged train. 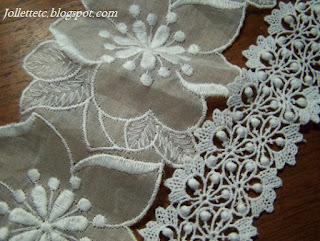 Finding different kinds of lace was not easy either.  We bought from every fabric store in the Tidewater area and even from a shop in Staunton, not far from Harrisonburg where I was in college. 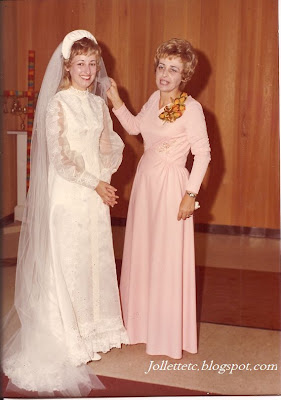 The wide lace was an eye-catcher. We used it on the sleeves and then from the shoulders to the hem.  The narrow piece was used down the center, at the empire waist, and for the neck.

I admit to making that veil.  It looks hideous now, but the Juliet cap and Anne Boleyn crown were considered quite “mo-derne” in 1973.


However, I did a better job on the bridesmaids’ headpieces.  I covered a buckram head band with green voile and lace left over from their dresses (Momma made two of the dresses).  To be sassy, I made a fabric bow for the side.  Mmm – yeah – Sassy alright! 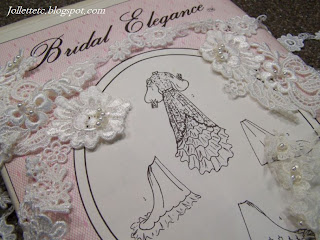 Fast forward ten years to 1983. My sister Mary Jollette too had found her dream dress in a magazine.  Fortunately, patterns and lace were more readily available.  In fact, the lace matches the inspiration perfectly.  The train on her gown was inspired by Princess Diana’s train, but not nearly as long. 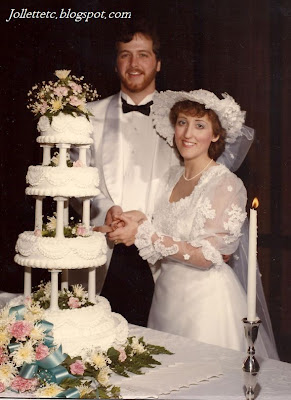 While the train was important, the big hat defined the 80s. Mary Jollette had fallen in love with a bridal hat in the magazine. Our metropolitan area, despite its many bridal shops and specialty dress shops, didn’t have it.  Surprisingly, she found the hat in the bridal shop in Harrisonburg.

Momma had requested that Mary Jollette not marry during the school year.  But Mary Jollette and Cam wanted to avoid the heat of summer, so April was the date. There were still papers to grade, and I had two babies to care for, so I was no help on that end this time.

That’s probably why the dress was never really finished.  Even though Momma spent her lunch hours at school sewing pearls and sequins onto the lace medallions, a pile of lace never made it onto the dress.  Surely a disappointment for my sister, but the dress didn’t suffer.


Don't hate us because we're groovy.

If you haven’t had your fill of wedding dresses, take a stroll down the bridal path to Sepia Saturday.