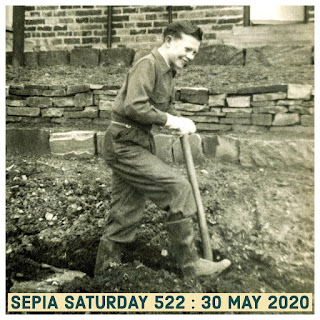 This week’s Sepia Saturday photo of a man digging a hole brought to mind photos I have shared before of the construction of an apartment building. With inheritance from her father and probably a bank loan, my grandaunt Violetta Davis set her sights on financial independence by building a home that would generate rental income too.

It was 1935. Violetta was a school teacher and principal. She hired J. W. Conrad & Son Contractors and Builders for the job. The plans called for 5 apartments. She would live in one and rent the others. Her early renters included faculty at Harrisonburg Teachers College (now James Madison University – GO DUKES!) where she was also on the staff as supervisor of student teachers.
In 1936, Violetta married Virgil “Dick” Ryan. He was a business man, an entrepreneur, who owned a news stand and bowling alley. Newspaper articles indicate he had a good eye for opportunity. Whether it was HIS idea or Violetta’s to add on to the apartment building in 1937 is anyone’s guess. In several news articles about the building boom in Harrisonburg, the Ryans were named among owners and contractors who were building or remodeling.


Evidently this is when Violetta’s apartment building went from 5 apartments to 6 when the attic was converted into a one-bedroom apartment.
While Violetta was the OWNER of the apartment building, Dick seemed to be the manager, if the rental ads are any indication.
Dick died young in 1941 and Violetta remained on her own the rest of her life. Whatever she learned about business from her husband she put to good use. In 1950, she purchased another apartment building just down the street. She always referred to it as “the Hartman house.” I never understood the significance of that name until a search in NewspaperArchive turned up an obituary for Roy S. Hartman. It turns out Roy’s wife was Dick Ryan’s sister. That means Roy was Violetta’s brother-in-law.

In 1940, Roy and his wife Edna lived in this apartment building. Google images show it is now a typical college apartment building looking rather worn. However, it used to look much neater.
The summer before my senior year in college, Violetta offered me the attic apartment. It was CUTE. Those windows facing the street were in the living room OR possibly a bedroom, depending on how a renter would use the big open area just inside the entrance to that apartment. The renters at the time placed their beds in what more logically seemed like a kitchen-living room combo. Anyway, it was a cute apartment but I opted for the convenience of campus life.

Between Violetta and the Hartmans lived Edgar Sipe and family. According to the 1930 and 1940 censuses, their home was a single-family home, but I remember it as two apartments because Barry and I lived upstairs from 1975-1976. It was also one of Violetta’s properties but I have been unable to determine when she purchased it. Mr. Sipe died in 1943, so sometime after that, for sure.
This apartment was HUGE. I wish I had pictures. While the 2 bedrooms were large with good closets, and the living room boasted those beautiful windows, and the eat-in kitchen had a real pantry, it was the bathroom I remember best. It had BLACK tile around the tub, black and white mosaic floor tiles, and the original pedestal sink. It was so pretty, but honestly, I never wanted black tile after a year of cleaning that bathroom. It really showed lint and dust.

Apartments were not the only properties Violetta invested in. She also owned a building that she referred to as “the store building,” whatever that meant. For a time, she rented it to John Edge for his piano and guitar business.

Violetta was very much a woman with a head for business. And it all started with digging a hole.

Make your way to Sepia Saturday to see what others have dug up for this week.