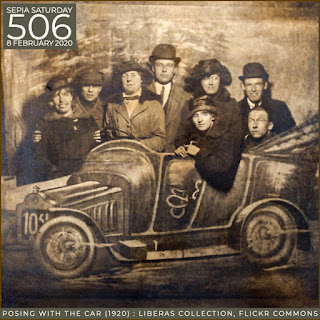 The photo of people posing with a cardboard automobile in this week’s Sepia Saturday prompt afforded an opportunity to share this photo:
What can we glean from this photo? The steering wheel gives the illusion of a car, but there are no doors, no roof, no windows. The draping behind the couples looks much like a tent at a circus or fair suggesting this might have been a prop in a precursor to today’s photo booth. The baby in the backseat probably was not real. The black beady eyes and unnatural pose of the arms make it look more like a doll, maybe a prize for shooting plastic ducks or knocking down all the milk bottles.

The photo was given to me by the grandson of the couple in the backseat: Mae and Clifton Holland. Mae (formally known as Mary Agnes) was sister to my paternal grandmother and sister to Helen Killeen Parker whose photos I have shared on this blog too many times to count.

The couple in the front seat was Clifton’s younger brother Henry Lee Holland and his unnamed wife, according to Mae’s grandson. She is wearing a wedding ring, so I must believe he is correct. However, there are some red flags that throw that conclusion into question.

A marriage record for Henry Holland dated 1942 claims he was SINGLE. The bride-to-be was divorcee Annie Sophie Wagner Whitley. However, the clothing in this photo seems to predate the styles of 1942, in particular the men’s stiff collars AND the lady’s wide-brimmed hat. Men’s collars of the 40s had become longer, more pointed. Ladies’ hats were much smaller.

Henry Holland and Annie divorced in 1946. He promptly married a widow, Mary Miller Mears. For the same observations about the clothing, it is doubtful the woman in the photo was wife #2 either.

I have no other photos of Henry, but thanks to my cousin, I have a photo of Clifton and Mae Holland with their children for comparison.
Pictured are Clifton and Mae in the center, surrounded by their children John, Mary Evelyn "Ebbie," and Jean. John was born in 1917, Ebbie in 1920, and Jean in 1926. Without an exact date of the photo, I will guess that surely little Jean was no older than 6, dating this photo to about 1932. Mae does not look a bit older in the previous photo suggesting that picture was taken earlier than 1942.

At least two trees on Ancestry put Henry Lee Holland with a woman named Elizabeth Mae Bailey. Despite my hopes that there had been a wife previous to Annie Whitley, there is no record online. There is, however, a marriage record for Elizabeth Mae Bailey and one James Henry Holland. Eh – probably another case of sloppy genealogy linking similar names without verifying the facts first.

To be fair, there are not many facts available online for Henry Lee Holland. In the 1920 census, Henry was just a teenager working as a messenger boy for the telegraph company. After that, the only records are marriage, divorce, and death. Those indicate he served in the Navy and was a torpedoman when he died in 1950.

So is this Henry and Annie in the front seat? I cannot say for sure. But one thing is clear: those Holland men were good-looking.

Strike a pose with cars – real and fake – at Sepia Saturday.