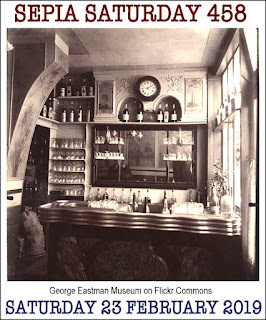 This week’s Sepia Saturday prompt features a pretty snappy bar well-stocked with spirits, seltzer bottles, and a variety of cocktail glasses. It looks like the kind of place where many of my family - both living and dead - would have spent a pleasant hour or four.

You might say that my family has had a long love affair with alcohol, both legal and illegal. According to family legend, my father’s maternal grandfather John Fleming Walsh was a descendant of the Walsh family that produced some brand of Irish whiskey. However, I cannot find any connection. During the Civil War my great-great grandfather James Franklin Jollett produced spirits and paid taxes on it. At the tail end of Prohibition, my paternal grandfather Fred and his younger brother Lester got themselves into trouble over it.

Lester was arrested for bootlegging in 1929, but in 1930 he was cleared after claiming to have been just an innocent passenger in the car when arresting officers raided the still near Blackwater Swamp in Southampton County. But how innocent could he have been? Lester bore a purple scar on his face, the unfortunate result of an encounter with an exploding still.

Lester might have gotten by with it once, but in 1936 he was not so lucky. He and big brother Fred were among the 23 arrested for bootlegging. It was front page news. Headlines and lead paragraphs were peppered with descriptions of the “rum ring” and “bootleg syndicate” as well as claims of a “liquor conspiracy.”

The indictment charged the 23 with operating distilleries in North Carolina, possession and transportation of liquor to Virginia going back at least to 1933.
Of the 23, only 12 including Fred and Lester went to trial. Six were not apprehended. One pleaded “nolo contendere” (accepting conviction but not pleading guilty). Four pleaded guilty and turned State’s evidence.

One of the key witnesses for the Government was Preston Sawyer. He told the jury that his partners included Fred Slade, Lester Slade, Lloyd Sundiez, and Millard Warren. In describing this “syndicate,” Sawyer said that they had formed the group to prevent price-cutting in the bootleg business. They were headquartered in several places in Portsmouth including a gasoline station and a couple houses.

Several witnesses confirmed that the liquor was bought at $5-$7 per 5-gallon jug and then sold at $9. An occasional retail sale sometimes brought in a higher amount.

Another important witness was George Roundtree who was then serving time in the Atlanta penitentiary for bootlegging. He testified that he had to quit the business because the “Portsmouth syndicate” (aka Fred, Lester, and Millard Warren) had threatened to put him in jail unless he purchased from them.

Case Goes to the Jury

The judge set 4 of the 12 free. The jury was left to decide the fate of the remaining 8, including Fred and Lester. On June 13, 1936, the headline read “Jury Hangs.”  The judge ordered a mistrial with instructions to try the case again. If the case actually went to trial, it must have been ho-hum news because there is no follow-up in newspapers available online.

HOWEVER, a week later my granddaddy and his “partner in crime” Millard Warren were sentenced to 18 months in the Atlanta federal prison for violation of the internal revenue laws on untaxed liquor. Alumni of the Atlanta penitentiary include Al Capone and other Mafia figures, fraudsters Carlo Ponzi and Frank Abagnale (portrayed by Leonardo DiCaprio in the movie Catch Me If You Can), and actor Woody Harrelson’s father who murdered a federal judge. Yep, Granddaddy was in fine company. 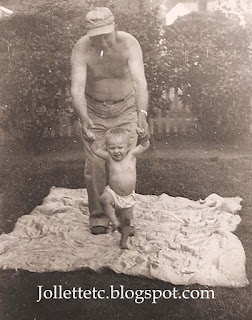 I have tried to make sense of all this, this other side of the sweet man I called Granddaddy. The man I knew was a generous and kind gentleman. He was always in a good mood, ever cheerful and positive. He carted my granny and her sisters to the grocery store without complaint. Part of me looks at the times - the Depression. It is easy to blame the economic struggles he must have faced, but really, that is no excuse. I just have to accept that sometimes good people do bad things.