Sepia Saturday: Hats Off to the Man in a Hat 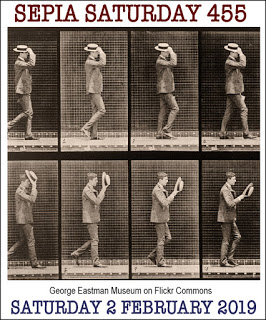 This week’s Sepia Saturday prompt features a series of photos of a man in a hat. I cannot replicate the effect of motion with a series of photos like the prompt, but I found one dandy photo of a man in a hat.
The man is my newly discovered 3X great-grandfather, Richard Hosier. The Hosier line surfaced when I discovered my great-grandmother Mary Morrison Slade accidently OR on purpose tricked me into thinking her family was from Tennessee. However, a death record for her sister revealed the connection to the Hosiers who had been in Nansemond County, Virginia at least since the mid-1700s, if not earlier. Nansemond County, now known as the city of Suffolk, is just minutes from my house.

In census records Richard Hosier was just your regular farmer.

He married twice, had a large number of children, and buried both wives before succumbing to cancer. Upon his death in 1899, his remarkable life came into the light. His obituary even included subheadings!
Town of Suffolk
The Checkered Career of An Octogenarian is Ended.

(Special to Virginian-Pilot)
Suffolk, Va, Sept 25 - Mr. Richard Hosier is dead, aged 84 years. The end came at 6 o’clock this morning in the home of a son, former Councilman J. Walter Hosier, Kilby and Wellons streets. The deceased had been in failing health twelve months, being first attacked by a cancer. He was semi-conscious about a week before the end. The funeral will take place at 11 o’clock tomorrow morning from the Christian Church, to which Mr. Hosier belonged.

WAS SENTENCED TO DIE
Mr. Hosier had a checkered career in the civil war. Being too old to enter the regular Confederate services, he and other aged men got shot guns and harassed the enemy by a sort of guerilla warfare. He was better acquainted with the Dismal Swamp than any contemporary and his knowledge was valuable. Mr. Hosier was three times made a prisoner of war. Once he was sentenced to die, which sentence was commuted to hard labor. 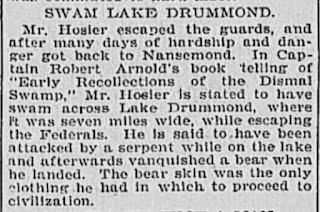 SWAM LAKE DRUMMOND
Mr. Hosier escaped the guards, and after many days of hardship and danger got back to Nansemond. In Captain Robert Arnold’s book telling of “Early Recollections of the Dismal Swamp,” Mr. Hosier is stated to have swam across Lake Drummond, where it was seven miles wide, while escaping the Federals. He is said to have been attacked by a serpent while on the lake and afterwards vanquished a bear when he landed. The bear skin was the only clothing he had in which to proceed to civilization.

Hosier’s story made the papers all over Virginia including those in Lexington and Arlington. The book mentioned in the obituary by Robert Arnold is actually entitled The Dismal Swamp and Lake Drummond: Early Recollections, published in 1888. It is available in full at HathiTrust Digital Library.


I won’t lie - Richard Hosier is my new favorite ancestor.

Grab your hat and walk, run, or even swim on over to Sepia Saturday.