It is not a yawning koala like the prompt image at Sepia Saturday, but the wallaby is from the same continent. Apparently this cousin of the kangaroo was a guest on board the USS Colorado when my maternal grandmother’s brother Ray Rucker was a sailor. Ray has been featured before HERE and HERE.

The Colorado was just a young ship in 1924 when she was sent from her home base in New York to California for force assignment. There the Colorado participated in a number of exercises and ceremonies with the Pacific Battle Fleet. Then from June – September 1925, the whole fleet paid visits to Samoa, Australia and New Zealand apparently just to “show the flag” in the southwestern Pacific.

The tour created some excitement at least in Auckland, New Zealand. The Royal Navy Volunteer Reserve staged its first parade several months in advance in preparation for the arrival of the United States Navy Battle Squadron. Its first official duty was to serve as the US Navy’s Honor Guard.

Ray saved some of the official photos and postcards from that tour. The reverse of the postcard featuring the Circular Quay at Sydney, New South Wales notes that it was issued by the government of Australia to the officers and men of the American Fleet July – August 1925. 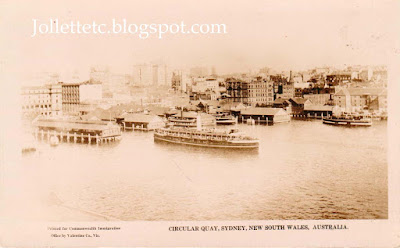 While most of Ray’s snapshots are not labeled, I assume some were taken while visiting Australia. After all, he saved a booklet outlining available tours. 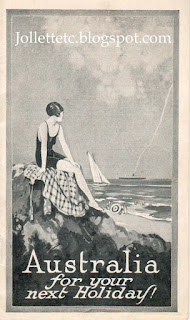 He also saved snapshots of the natives in Samoa.

Stifle that yawn! Be rejuvenated at Sepia Saturday.