Sepia Saturday: Pay Attention to the Woman in the Hat

NOTE: The information about Josie Sheehan and Carl/Charles Krause is in error. This is a different family, not the Josie who was sister to Mary Theresa Sheehan Killeen Walsh. You can read more recent research on Josie Sheehan HERE.


This week’s Sepia Saturday photograph of the travelers aboard the WALSH Royal Mail and Day Car has prompted me to revisit my mystery family in New York. My great-grandmother Mary Theresa Sheehan Killeen WALSH made many trips from Virginia to visit her sisters and possibly a brother. However, I doubt she ever traveled to New York by postbus.

I can sit for hours trying to coax clues from the photos of Mary Theresa’s relatives in New York. I feel that I’m soooo close to identifying not just the relationship but also the names. Unfortunately, too often the clues lack the facts to support a conclusion.

Take this photo, for example.

The men in the front seat are unknown, but I can GUESS that the man riding shotgun is John Sr., last name unknown. Why? Because of photos from 1917 and 1918 with “John Jr” and the same poodle.


The two women with him are my grandaunt Lillie Killeen on the right and possibly John Jr’s grandmother on the left in a hat. I used to think the older woman was my great-grandmother Mary Theresa, but other photos make me second-guess myself.


In this view, the younger man has been replaced with an older man, who was likely John Jr’s grandfather. The same older gentleman is pictured with John Jr in other photos.

I know for a fact that Mary Theresa had a number of sisters:  Josie, Sarah, and Delia. There also might have been a brother, possibly named John, but that has not been confirmed. Supposedly there was another sister whose name is unknown.

Because of this photo of her sister Josie with John Jr and his sister Bob/Bobbie/Barbie, I wanted to think that this was Josie’s family. Josie looks somewhat like the woman on the right in this group photo below.


If so, the older man in the first photo is NOT Josie’s husband Carl/Charles Krause. He was a carpenter, not someone who would wear a uniform. Besides, Josie was a widow and head of household by 1920. In that census, only one child was out of the house:  Hannah. But marriage records at Italiangen.com do not name a husband “John.” The three records for any Hannah Krause and variant spellings do not pan out since no appropriately named children appear in the 1920 census. 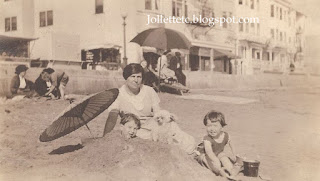 This photo from 1917 with John Jr shows a light-haired woman who might possibly be the grandmother. In 1920, the children seem to love this woman whose hair color makes me think they are the same woman. While she does not look particularly like the woman in the hat, she does resemble the woman at the beach with John Jr and Bob/Bobbie/Barbie – despite the darker hair – and the one in some Southern locale with the children.


So now assuming that the older woman and man in the car are the grandparents of John Jr and Bob/Bobbie/Barbie, the question is whether the couple are Mary Theresa’s sister and brother-in-law or brother and sister-in-law. If this is her brother, then which of the young parents is the direct relation? I doubt “John Sr” was a Sheehan because I cannot find John Sheehan Jr with a sister named Barbara, Barbie, Roberta, Bobbie in the 1920 or even 1930 census. Besides, the group photos seem to emphasize the women, suggesting that John Jr’s mother was the daughter, and therefore Lillie’s cousin.  (Still with me?) 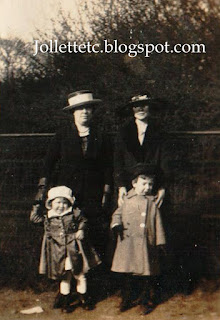 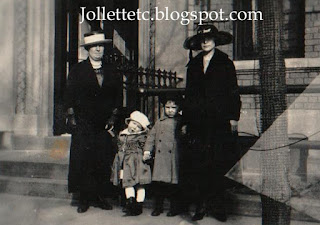 Based on the hatted-woman’s general appearance and body-type, I guess she is Mary Theresa’s sister. Not Josie. Not Delia. Possibly Sarah. I can confirm only one child for her - Sadie, who became a nun – but it is possible she had other children.

That said, I fear the worst – that this is the sister whose name has been lost to history.

Hop aboard a postbus, wagon, or open car and take a ride to Sepia Saturday.