52 Ancestors: The Other Half - Jolletts in Madison County

Amy Johnson Crow of No Story Too Small has issued a challenge:  write one blog post each week devoted to a specific ancestor. It can be a story, a biography, a photograph, an outline of a research problem – anything that focuses on one ancestor.

To mark the halfway point in the 52 Ancestors 52 Weeks project, we are to contemplate the word “half.” Which ancestor has been researched only “halfway”? Which ancestor takes up half of our research time? Probably the first question can be answered, “Just about any one of them!”

When Ancestry recently released its latest collection of birth, death, and marriage records for the state of Virginia, I spent hours gathering various bits of data and copies of certificates to add to my database. In doing so, I discovered a new-to-me Jollett – a Jollett in Madison County – a “new” family that had escaped me.

Her name is Julia Ellen Kean. She was born in Madison County, Virginia, April 6, 1828 and died in the same county March 12, 1917 from an accidental fall down a flight of steps which resulted in broken ribs. 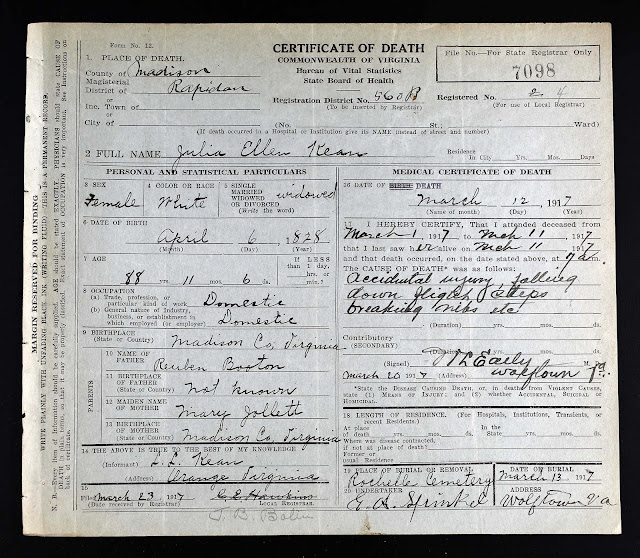 According to the death certificate, Julia was the daughter of Reuben Booton and Mary Jollett. But who was THIS Mary Jollett? The only possible clue right now is a lawsuit in Madison County dated 1821 in which one James Jollett was the defendant in a land dispute. Julia’s birth in 1828 puts a date of birth for her mother Mary anywhere from 1788 to 1814, meaning James could possibly be Mary’s father and Julia’s grandfather. If so, then MY James Jollett – my 4X great-grandfather – may have had a cousin by the same name.

It is also possible that the James of the lawsuit was MY James Jollett who lived in Greene County. When he and Nancy Walker married in 1787, they were in Culpeper County from which Madison County was formed in 1792. According to the lawsuit, James Jollett sold the land in 1788. So it’s possible this is the same person and Mary was someone else’s daughter. But whose? Was she the daughter of that mysterious Francis Jollett who paid personal property taxes in Culpeper County in 1782?

At any rate, Julia Kean’s death certificate has alerted me to the fact that there was another “half” to my known Jollett family of Greene County. There surely were cousins living in neighboring Madison. Let the hunt begin!