Geneabloggers is once again hosting the Advent Calendar of Christmas Memories encouraging family historians to write about their holiday traditions.  Today’s theme focuses on a family member who has a December birthday.

My maternal grandfather Orvin Owen Davis was born December 12, 1899, in Shenandoah, Virginia.  If he were living today, he would have just celebrated his 112th birthday.  I don’t think I ever knew his birth date until I read it on his funeral card in 1963.  Certainly no birthday celebration stands out.  Then again, I don’t recall ever celebrating anyone’s birthday.  Except for kids’ parties, birthdays went largely unnoticed until I was an adult when birthday parties became an excuse to get together for dinner.

But enough about that.  This is supposed to be a tribute to Granddaddy Davis.  He was the second child born to Mary Frances Jollett Davis and Walter Beriah Sylvester Davis.  (You can click on the pictures to enlarge them.)

They lived in a two-story white house on the corner of North Third Street and Williams Avenue in Shenandoah, Virginia. 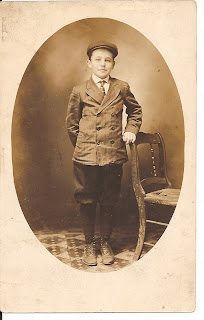 Later on his father built a Sears Craftsman house on Sixth Street.

Apparently Granddaddy was a good student, but he didn’t finish school.  Great-granddaddy Davis made the boys quit school and go to work in the family store, but the girls not only finished high school, they both graduated from college as well.

Granddaddy owned a garage in Shenandoah, Virginia, but during World War II, he moved his family to Portsmouth, Virginia, to work in the shipyard.  Granddaddy died when I was 12, but a few memories are vivid: 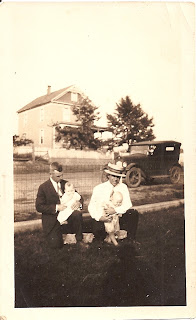 3.       Riding in his Buick to the drug store to buy penny candy and a coke after school