Sepia Saturday: On Track and Off 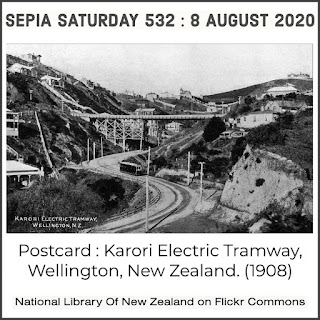 This week’s Sepia Saturday challenge depicting an electric tram or cable car got me to thinking about my great-grandfather’s death certificate.
The cause of death was hypostatic pneumonia resulting from a crushed pelvis sustained when he was struck by a streetcar.

I thought surely such an accident would have made the newspaper, but it didn’t. However, the news reporters were all over the story in March 1899 when a prominent citizen of Portsmouth, Virginia was killed by an electric car when he was out shopping for ice for his sick wife. As the headline said, he was “Horribly Crushed.”
Details of the accident reveal that he did not die on impact. In fact, there was plenty of time to call a number of doctors to his aid. They all looked at the mangled mess and shook their heads knowing there was nothing to be done.

Mr. Peed was conscious and implored those surrounding his couch to turn him over, that he was suffering excruciating agony. He knew well those who were about him and called them by name, and especially did he ask to move his legs that he might sit up.


But that was impossible, for he had been horribly mutilated, his lower abdomen being crushed and that part of his body from the waist to just below the hips was in a state horrible to behold and terrible to contemplate. His head, too, had sustained awful wounds, around which the bruised blood had settled. Just over the right forehead a ghastly looking puncture presented itself, looking as if a three-edged weapon had been used with great force.

I wonder if my great-grandfather’s injuries were anything like this.

Bystanders reported that the accident might not have happened had the victim not been deaf. They described what they saw:
A prominent Crawford street merchant said he heard some one hallowing for a distance, it seemed to him, of a square, and then looking down the street, saw the car strike Mr. Peed, pass over his body, and then, as if being released from the current, again pass over him, by a backward motion.
Another gentleman made no effort to conceal what he knew, and was positive that the fender of the car struck Mr. Peed, threw him against the end of the car, and he fell, and the car passed once over his body forward, and then again backwards. The wheels of the right hand half of the front truck passed over Mr. Peed.


What a horrible scene! But because I am so immature, I can’t help focusing on the unfortunate man’s even more unfortunate name: Peed. OK, I am sure PEED was a fine family name. It probably is a variation of PEAT. I wonder if the name had German origins. Before spelling became more standardized, court clerks recorded what they heard. In my family, the German accent resulted in the name “Ebert” morphing into “Eppard.” Maybe that happened in Mr. Leroy Peed’s family too.

The Peed name is common here in the Hampton Roads area of Virginia. My mother used to tell the story about a talent show or recital, I have forgotten which, that she attended as a young adult. The emcee who introduced each performer announced, “Next, Martha Sue Peed at the piano.” We all laughed at that story – immaturity is a family trait.

As a teacher, my mother one year had a class with two students with unfortunate surnames: Buzzard and Sweat. I wonder how people put up with jokes on their name. I would be pronouncing them “Byu ZAARD” and “Sweet.”

When I was a teacher, I worked with a fine gentleman who was an outstanding teacher of grammar and literature: Mr. James Butts. When I left teaching to stay home with the kiddos, I was replaced by another outstanding English teacher: Mr. Marvin Fanny. Butts and Fanny – same department, same school. What stars aligned for that to happen?

I went off track this week. (Pun intended.)

Get back on track with more street car adventures at Sepia Saturday.