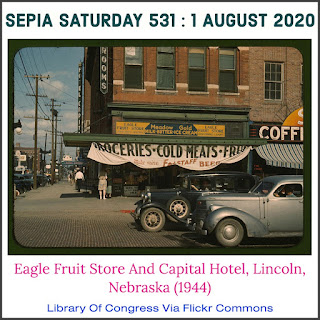 Pictures like this week’s Sepia Saturday prompt can be a real time-suck for me because I find myself Googling to identify the model of the cars, to determine whether products like Meadow Gold milk and butter are still available, and to find old photos of buildings identified by their signage. It’s a handsome photo, one with which I cannot compete. I have grocery stores and grocers in the family, but most have already been introduced on my blog. The good news is I still have one more. The bad news – and it’s really not that bad – is that he isn’t family.

When Barry and I were planning our wedding in 1973, the FOLK WEDDING was the rage. I guess it grew out of the “Make love, not war” / “Do your own thing” attitudes of the 1960s-early 70s. Less formal than traditional wedding ceremonies, the folk wedding often included folk tunes accompanied by guitar. So I needed a singer. And a guitar. My aunt, my dad’s sister, suggested Joanie Glynn. What? Who? “You know – the Glynns. They’re cousins,” she said and Daddy confirmed.

I’ve gone years just accepting that the Glynns are our cousins. I figured they must be those distant cousins, those 2nd or 3rd cousins that no one really gets to know. When I actually did the research, I saw almost immediately that they are not MY cousins at all. They are not my aunt’s or dad’s cousins either. They are not even my grandmother’s cousins. The Glynns are cousins of my grandmother’s HALF-siblings. My great-grandmother married twice; my family descends from the second husband. The Glynns are related to the first husband, the OTHER side of the family.

John and Bridget were in Virginia by 1890 as all 6 children were born there between 1891 and 1910. John operated a grocery store at the corner of Henry and Second Streets. In the 1900 and 1910 census, they lived on Second. In later censuses, they lived on Henry. In every census except 1940, John was enumerated as a grocer or merchant. City directories through 1935 also show him as a grocer. By 1936, he was retired.
Photo albums that I have inherited from my Killeen aunts Helen and Lillie reflect the closeness of the Killeen and Glynn families.

I have the Glynns to thank for my very existence. My great-grandmother Mary Theresa Sheehan Killeen had planned to be a New Yorker until John Joseph Killeen died in 1905 leaving her a widow with 5 children to raise. Her sister-in-law Bridget Killeen Glynn persuaded her to come to Portsmouth to be with family. According to family lore, it was Bridget who introduced Mary Theresa to her future second husband John Fleming Walsh. And as they say, the rest is history.

I’ll say this though about the Sheehan-Killeen-Walsh group, they did not and do not discriminate based on a last name. Family is family. A cousin is a cousin regardless of DNA.

There is more in store at Sepia Saturday.