The theme for this week’s 52 Ancestors challenge is appropriate: Independence. After all, the 4th of July is one of the favorite patriotic holidays in the United States. Parades, fireworks, and family cookouts are happening in every community. Patriotic organizations like Daughters of the American Revolution (DAR) honor their ancestors with wreath-laying ceremonies at national monuments and placing flags at graves of patriots.

I am proud to claim a number of patriots who helped America achieve independence. For over a year I had been trying unsuccessfully to join DAR through Leonard Davis of Rockingham County, Virginia when I received an email from a gentleman who was transcribing records for Albemarle County. As part of his project, he searched online for additional information relating to the documents he was working on. That is how he found my blog. He saw names on my blog that were also included in a chancery suit he was then transcribing. He offered me a copy. As I read it, I immediately saw my express ticket into DAR through my 4x great-grandfather William Jordan.

Thanks to Fold3, I have a copy of William Jordan’s pension application containing many details about his early life and service to his country. Apparently his first attempt to secure a pension was denied for failure to provide actual PROOF of service. His discharge papers had been lost years before in a house fire. Subsequent hurdles to obtain a pension included several court appearances like this one:
Sworn to and Subscribed in open Court and thereupon the Court propounded to the applicant the following Interrogations.
1. Where and in what year were you born
A. I was born on the Schuylkel [sic.] river about six miles from Philadelphia the 20 Jany 1760
2. Have you any record of your age, and if so where is it?
A. I have none.
3. Where were you living when called into service? Where have you lived since the revolutionary war and where do you now live?
A. When called into service I lived in Augusta County Virginia. About the year 1783 or 4 I removed from the County of Augusta to Albemarle County and lived some years in the adjoining county Orange, but now live in Albemarle County Virginia.
4. How were you called into Service were you drafted did you volunteer or were you a substitute and if a substitute, for whom?
A. I was drafted as a militiaman
5. State the names of some of the regular officers who were with the troops where you served with Continental and Militia Regiments as you can recollect and the general circumstances of your service 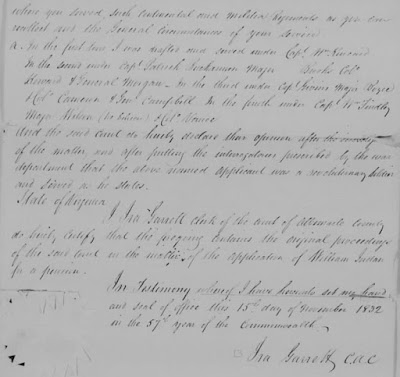 A. In the first tour I was drafted and served under Capt. Wm Kincaid. In the second under Capt Patrick Buchanan Major ___ Brooks Col Howard & General Morgan. In the third under Cap Givens Major Boyce Col Cameron & Gen Campbell in the fourth under Capt Wm Findlay Major Wilson (he believes) & Col Vance

And the said Court do hereby declare their opinion after the investigation of the matter and after putting the interrogation prescribed by the war department that the above named applicant was a revolutionary soldier and served as he states
State of Virginia
I Ira Garrett clerk of the Court of Albemarle County do hereby certify that the foregoing contains the original proceedings of the said court in the matter of the application of William Jordan for a pension.

In May of the following year William Jordan tried again by offering further information. A. Broadhead, a Justice of the Peace for Albemarle County, submitted an affidavit in which he explained that “William Jordan . . .  by reason of old age and the consequent loss of memory . . . cannot swear positively as to the precise length of his service. . . .” However, William Jordan was positive he served as a private from May to October in 1779. He took part in an expedition against the Indians on the West Fork of the Monongahela River as a private in Capt William Kincaid’s company. Then from October 1780 until May 1781 he served again as a private.

An affidavit provided by William Brooks revealed more about their service together as militiamen. They marched from Albemarle under the command of Capt Patrick Buchanan and joined General Daniel Morgan at Six Mile Creek in North Carolina. They then were commanded by Col Howard from Maryland and General Morgan at the Battle of Cowpens (South Carolina), 17 January 1781. Using a little battlefield trickery, the American troops fooled the British into thinking they were retreating causing the British to run straight into concentrated rifle fire and cavalry charge. Due to heavy casualties inflicted on the British by American troops, the Battle of Cowpens is regarded as a major battle and a turning point in the war.
On a side note, the Battle of Cowpens was the inspiration for the final battle at the end of the film The Patriot starring Mel Gibson. Sweet Liberty, an earlier movie starring Alan Alda, parodies how film companies often take liberties with the depiction of the Battle of Cowpens.

Another affidavit provided by John Diddle said that William Jordan was at the Battle of Jamestown, the last major land battle in Virginia prior to the Siege of Yorktown. The American forces were ambushed near Green Spring plantation 6 July 1781 but did not fare very well in a battle that is thought to be one of the bloodiest and most intense of the war.

Jordan was less certain about his final tour but remembered serving in Capt William Findlay’s company and Col Vance’s regiment before becoming ill following the march to the Siege of Yorktown, the battle that marked the end for England in the American colonies. It also marked the end of William Jordan’s service as he was furloughed and never able to return to service.

William Jordan eventually received a pension of $33.77 per annum. According to one inflation calculator, that amount had the same buying power as $870 today.

In the beginning, the thirteen colonies did not have in mind becoming one big country. Rather they sought independence from England to become thirteen little countries, each with its own government and its own money. The leaders who framed the Declaration of Independence and later the Constitution looked into the future and saw that no new little “country” would be a match against possible future invasions by Spain, France, or England. Uniting would be the best course.

And my William Jordan at age 19 aided the cause marching to and fighting in three colonies; he was right there in the company of our heroes, men like Marquis de Lafayette, “Mad” Anthony Wayne, Nathanael Green, and “Old Wagoner” Daniel Morgan.

I wonder what he thought about that.