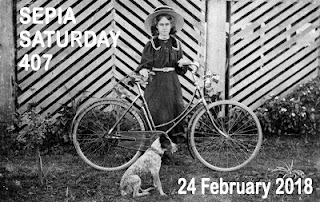 This week’s Sepia Saturday prompt immediately brought to mind a number of photos of girls with their dogs. As a little girl, my mother had a mutt named “Fritz.”
My grandaunt Helen Killeen Parker apparently enjoyed the companionship of several dogs over the years. 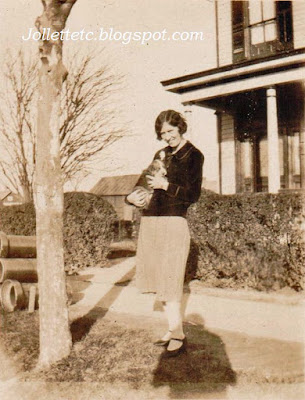 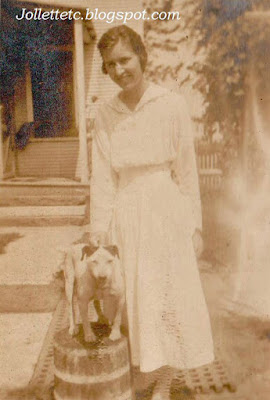 Helen did not label many of her photos with names, but this one she did. Lucile. But Lucile who?

In the same photo album was this one of Mitz and Lucile. Mitz? What kind of name is that for a guy?

As with most things in my genealogy world, one little curiosity eventually fades from my thoughts only to be replaced by another. Trying to identify Mitz and Lucile was not a priority. Heck, they were probably not even family. Learning more about my dad’s Irish granny and her sisters is always one of several competing priorities. I hoped Aunt Helen’s wedding gifts book would provide clues to the identity of those darn children and lady with a poodle.
Instead I found this: Mr. and Mrs. Mitz Ollice. Above that listing is Mr. and Mrs. John Ollice.

It is no surprise that “Mitz” Ollice is not to be found on Ancestry.com. John Ollice, however, is right there in the right neighborhood, in the right period of time. He was not old enough to be Mitz’s father. Nor were any of the other Ollice boys. While at first the census record appeared to be a deadend, it turns out John and Mitz were brothers, 2 of 6 sons born to Thomas and Alice Trainer Ollice. Mitz was not listed as Mitz; further search revealed that he was William Innis Ollice.

William Innis “Mitz” Ollice was born in Vicksburg, Mississippi in 1899, but by 1900, the Ollice family was settled in Portsmouth, Virginia where Mr. Ollice worked as a machinist in the shipyard. The Ollice family lived on Atlanta Avenue in Portsmouth, just a few streets away from Charleston Avenue where Aunt Helen and her sisters and brother grew up.

A marriage record for William Innis Ollice solved the mystery of Lucile. His bride was Lucile Fritzinger of Norfolk, Virginia.

She was born Lucile V. Fritzinger, daughter of Eli and Mamie Smith Fritzinger. That “V” stood for Veronica OR Virginia, depending on which Ancestry tree you want to believe. Her father was a baker.

The son of a machinist and daughter of a baker growing up in two different cities separated by a river somehow met. Perhaps they met at the popular Ocean View beach where so many of Aunt Helen’s summer photos were taken. In fact, the one of Mitz and Lucile was taken probably a year or two before they married in 1923.

In 1927 when Helen Killeen and Walter Parker married, they received more silver and crystal than anyone today would want. But the Ollices and Fritzingers had a different idea:  bedspreads and dresser scarves. 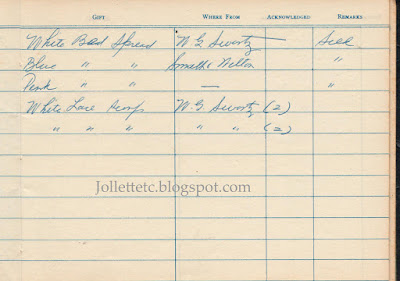 Hop on your bike or walk your dog over to Sepia Saturday.