My blog has been rather quiet recently. The excuses reasons are numerous: working on house projects, vacationing, helping others with research, writing another Jollett family history book, blah blah blah.

Then an email arrived to spur me back into the ring, but it was not a result of “cousin bait” doing its best to lure new contacts who might share photos and stories about our common ancestor. No, the email was from someone who will remain a stranger. Still, I am grateful for what he had to tell me.

“Ron” and a friend had recently purchased an old box of weaving drafts. They are making it their mission to identify the women that wrote them and learn their story. One of the drafts was signed by Miss Frances Jollette and another by Fannie E. Jollett, same woman. One more was written on reused paper with a note on the back:

Not surprisingly, when Ron Googled “Frances Jollett,” my blog popped up. What he learned from my blog about Fannie Jollett was not much, just the bare minimum: a year of birth, the name of her mother, and her association with a few family members. No real story. Not even a date of death.

Ron’s email reminded me that I have not thought about Fannie Jollett in quite some time. She has always been just a minor character in the drama of my family tree. Yet she is the star in a minor contradiction that has me puzzled. Let me start from the beginning.

Fannie was born in Orange County, Virginia in 1822, the daughter of Tabatha Jollett. Just going by the tick marks in early census records when only the head of household was named, Tabatha was likely an unmarried daughter of James Jollett and Nancy Walker Jollett. I do not see a spot for an unnamed son who might have married a girl named Tabatha and left her widowed before 1850, so I am sticking with my theory of “unwed daughter.”

In 1850, Tabatha and daughter Fannie were living in the household of Elizabeth Jollett King (daughter of James and Nancy) and her daughter Columbia. By 1860, Tabatha and Fannie were on their own in Greene County even though they seemed to have no visible means of support. If Fannie earned a living as a weaver, she did not declare it in the census. Elizabeth had moved to Rockingham County to live with her daughter who married Thomas Marsh in 1853.

Tabatha apparently died before 1870, so it is no surprise to find Fannie once again in the household of her COUSIN Columbia Marsh along with husband Thomas Marsh and mother Elizabeth King. I emphasize “COUSIN” because in 1878 when Elizabeth King died, Fannie - not Columbia - was the informant. In the record, Fannie claimed she was Elizabeth’s GRANDDAUGHTER.

Since Fannie is such a distant relation, the puzzle has not been important to me until now. That email revived my interest in this elusive ancestor. I recalled that some time ago I found a chancery cause at the Library of Virginia in which Peter Haynes sued Fannie Jollett for failure to make payments on property she purchased from him.

It seems that in 1866 Fannie Jollett purchased from Peter Haynes twenty-five acres two miles east of McGaheysville in Rockingham County, Virginia.  She promised to pay in four annual installments, but apparently failed to follow through. Haynes claimed she was wasting the land by selling off the timber thus making the property less valuable. He further claimed that since she was insolvent, the only recourse would be for the Court to seize the property and sell it.

The case became more complicated because Miss Fannie Jollett had sold one-quarter of an acre to a group of men who wished to build a school. While the group did not object to Fannie’s land being sold out from under her, they considered their little purchase from her a good and valid sale.

Fannie did not just roll over. Her answer to Haynes was that she had made some partial payments but did not pay the full amount annually because she learned Haynes did not have a clear title to the property which actually belonged to a man named Mathias Kersh. Kersh was then added to the suit, but the evidence showed that Haynes was on the side of right. He did indeed have a clear title to the property in question.

In 1873 it became clear that Fannie was losing the battle. The question became whether she had paid Haynes anything at all, how much and when, and whether to sell the 24 ¾ acres as one parcel or two. Counsel for the defense brought in Fannie’s COUSIN Columbia Marsh as a witness. Here is part of the deposition: 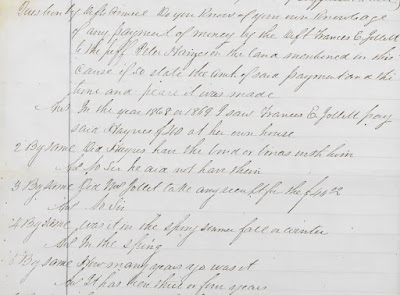 Question by Def[ense] Counsel.  Do you know of your own knowledge of any payment of money by the Deft [Defendant]  Frances E. Jollett to the Piff [Plaintiff] Peter Haynes on the land mentioned in this cause if so state the amt. of said payment and the time and place it was made.
Ans  In the year 1868 or 1869 I saw Frances E. Jollett  pay said Haynes $40 at her own house.
2 By same  Did Haynes have the bond or bonds with him
Ans  No Sir he did not have them
3 By same  Did Miss Jollet take any receipt for the $40
Ans No Sir
4 By same Was it in the spring summer fall or winter
Ans In the spring
5 By same How many years ago was it
Ans It has been three or four years

and part of the deposition of Fannie Jollett in which she answered the same questions posed to Columbia:

Ta da - there it is. In her own words, Fannie confirmed she and Columbia were cousins and that Elizabeth King was Fannie’s aunt.

As for the death record in which it appears Elizabeth King was Fannie’s grandmother, that misstep can be chalked up to any number of reasons from nervousness to old age to clerk’s misunderstanding.

Oh, and if you are wondering, yes, the property was sold at auction. Unfortunately, poor ol’ Peter Haynes did not live to see it, but the property fetched enough to pay his estate and cover the costs of the lawsuit.

“Niece or Granddaughter?” is hardly the exciting research question, but in following the advice to chase every clue even if it does not look like a clue, I found an answer and much more.

This is my contribution to the Genealogy Blog Potluck Picnic. 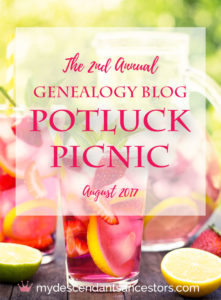