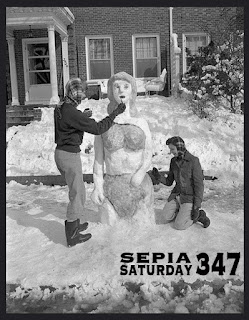 This week Sepia Saturday is all about snow. Here on the east coast of Virginia, an annual snow event is not a given. We are just as likely to get snow in October or March as in a winter month. In 2015, we ran the air conditioner Christmas Eve. A white Christmas is rare. Growing up, I never asked for a sled or toboggan, ice skates or skis. In fact, I’ve gone years with no snow boots. So it is not surprising that my snow memories are few.

Nothing is more beautiful than new-fallen snow. It begs to be rolled into balls as ammunition in a friendly fight or formed into snowmen. It invites us to get out and play, to find a hill to sled down. Maybe that was how my dad felt back in January 1959 when he coaxed my mother onto a sled, not to race down a hill but simply to pull her up and down snow-covered Frailey Place for the fun of it. She was a full 9-months pregnant, just days before delivering my much-wished-for baby sister.

It was a wonderful afternoon. All the neighbors were out making snowmen and pulling one another on sleds. It’s a good thing too because when Momma was done with sledding, it took Daddy and three other men to get her up off that sled. Momma was not one to recover easily from public humiliation. I don’t think she got on a sled ever again after that.
#2 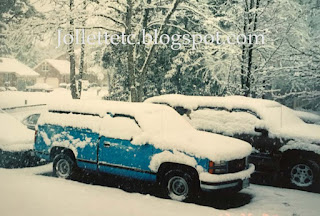 After the Great Humiliation of 1959, you would think Momma might also have quit listening to my dad’s ideas, but no. In the late 1970s, a heavy snowfall covered the roads making them treacherous for several days. When cabin fever set in, Daddy decided it would be fun to walk from their neighborhood to mine, only about 2 miles. Of course, our family is rarely prepared for disaster, and that was one of those years when Momma had no snow boots. Solution? Daddy tied plastic garbage bags over her shoes, and they set off on their 2-mile walk through the snow. Have you ever walked in plastic bags? There is no traction. There is, however, a lot of slipping involved. Quite the cardio-workout.

Being caught off-guard is nothing new for our family, and we never learn our lesson. However, that is not the case for my city and the surrounding cities. At the first sign of even a remote POSSIBILITY of one little snowflake, Hampton Roads kicks into gear salting roads and bridges. We learned a powerful lesson in March of 1980. 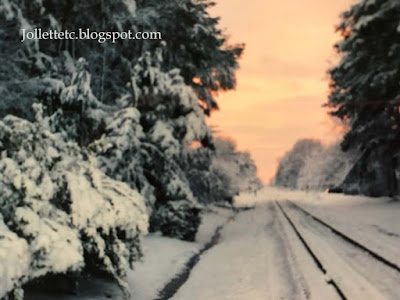 I don’t know how all school systems work, but here in Virginia, public schools must be in session a certain number of days. Every year “snow days” are built into the school calendar allowing the schools to close in bad weather or for other emergencies without having to extend the school year in order to make up lost days. In case a school must close early for whatever reason, the rule is that if lunch was served, it counts as a full day.

So on March 2, 1980, it started to snow. And snow hard. I was teaching – or trying to before I just gave up because the students and I couldn’t keep from looking out the windows. We could tell by the look of the sky that this was no routine snow. This was going to be big. But it wasn’t lunch time yet. Teachers kept popping in and out of each other’s classrooms. “Are we closing early? Have you heard anything yet?” Hours went by. Finally the last lunch was served and we were sent home.

My mother, also a teacher, inched her way from her school to mine, picked me up, and we headed for home which was just 5 miles away, usually a 15-minute drive. As we approached the Churchland Bridge, we saw that cars were sliding back down, unable to climb the icy grade. There was nothing to do but make a slow u-turn and try another route. That day it took us TWO HOURS to get home.

At least we got home. People who had gone to the Circus at Scope in Norfolk were stranded there over night when the cities declared a travel curfew.

Now whenever there is snow in Hampton Roads, film clips and reports of “the Circus Blizzard of 1980” are brought out again.

Snow is a two-edged sword.

Bundle up and head over to Sepia Saturday for more stories of snow.