Genealogy Photo a Day is a month-long challenge coordinated by Genealogy Girl Talks.

Good grief. My plan was to post each day’s Instagram photo here on my blog during the November Photo A Day Challenge. I am sure you don’t want to hear how this thing and that got in the way, so I’ll just do a “Week in Review” and hope that things go better next week.

Day 2 – Ancestor
I was over the moon when I got a Facebook message from Jan Hensley and an email from Mary Garrett asking me to help identify people in this photo. Mary is a descendant of the seated woman on the left, Jenetta Dovel Shiplett. In their early married life, Jenetta and husband Philip Pendleton Shiplett lived with his mother Susan Jordan Shiflett. Mary and Jan feel confident the older woman, seated on the right, was Susan, my 3X great-grandmother. They also think that the other girls in the photo are a combination of Susan’s children and grandchildren. The taller girl standing is most likely Susan’s daughter Segourney, my 2X great-grandmother. I hope they are right. Isn’t she just beautiful? 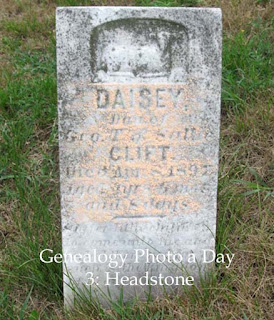 Aged 3 yrs 6 mos and 8 days
Suffer the little children to come
unto me and forbid them not
for to such is the kingdom of heaven.


One of the saddest little headstones in my collection of photos is this one. Little Daisey Clift and her brother Vernon, children of my great-grandmother’s sister Sallie Jollett Clift, died from injuries suffered in a house fire in 1897. I would like to locate a newspaper article. Surely the loss of two little ones under age 5 had to have been big news in Page County, but none of the newspaper databases include those from Page County or the closest big city of Harrisonburg. 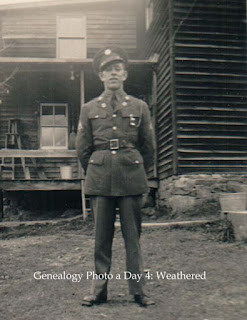 My husband’s uncle Wilmer posed proudly for this photo outside his parents’ home in Mathias, West Virginia some time during World War II. Whenever Barry and his brothers and sisters get together, they always recall their favorite times at their grandparents’ home. I visited this home only once. Those weathered boards were painted white when I was there, but the house itself looked much the same – very simple and rustic, devoid of any ornamentation or signs of having been remodeled EVER. But inside, the house was warm. The sun poured in through those big windows. It felt very cozy, and I could imagine all the cakes and pies and cookies that the Mathias kids enjoyed thanks to their grandmother Essie’s good cooking. 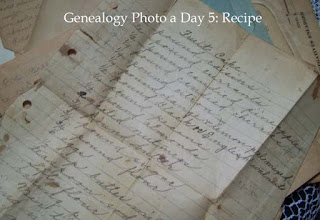 And speaking of cooking, here is one of 5 recipes for fruit cake that I found in a notebook passed down to me from my great-grandmother Mary Frances Jollett Davis. I don’t know who needs 1 recipe for fruit cake let alone 5. There were other recipes too, mostly lots of desserts. 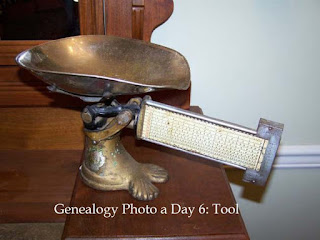 This scale came from the Davis Store built by my great-grandfather Walter Davis and run by my grandparents Orvin and Lucille Rucker Davis until they moved to Portsmouth in the 1940s. It is not a very large scale, so I doubt it was weighing out huge bags of flour and brown sugar. Actually, I cannot imagine what they might have weighed.