Sepia Saturday: Life and Death on the Train

This month Sepia Saturday is all about travel to and fro.

I wonder who this unidentified woman at the Grove Hill train station was and where she was going. Maybe just a few miles away to Shenandoah or Luray? Maybe further along the route to Harrisonburg, Staunton, or Roanoke? Or maybe she had a big trip planned to Washington DC or even New York.

No doubt she was a passenger on the Norfolk & Western Railroad that ran through the Shenandoah Valley. The railroad was big business in the 19th and early 20th centuries, especially for the little town of Shenandoah, Virginia, where so many of my ancestors lived. Over 30 members of my family were employed at one time or another by the railroad. They were conductors, engineers, brakemen, firemen, car repairmen, signal men, clerks, and railroad storekeepers.

If citizens of Shenandoah didn’t work for the railroad, they were neighbors to someone who did. The N&W fostered a tight community. So it must have been a sad time for everyone when one of their own was hurt on the job. No doubt friends and neighbors rallied around my family when a son/husband/brother/father confronted the worst day of his life on the job. 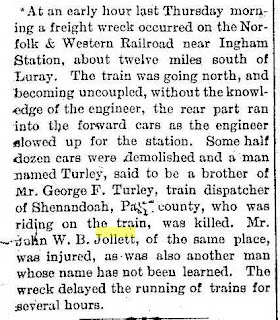 6 Aug 1897 Harrisonburg Rockingham Register
At an early hour last Thursday morning a freight wreck occurred on the Norfolk & Western Railroad near Ingham Station, about twelve miles south of Luray. The train was going north, and becoming uncoupled, without the knowledge of the engineer, the rear part ran into the forward cars as the engineer slowed up for the station. Some half dozen cars were demolished and a man named Turley, said to be a brother of Mr. George F. Turley, train dispatcher of Shenandoah, Page County, who was riding on the train, was killed. Mr. John W. B. Jollett, of the same place, was injured, as was also another man whose name has not been learned. The wreck delayed the running of trains for several hours. 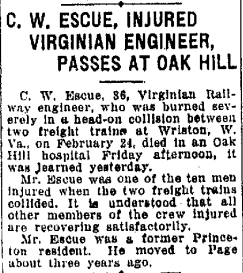 1935 Bluefield Daily Telegraph
C. W. Escue, Injured
Virginian Engineer,
Passes at Oak Hill
C. W. Escue, 36, Virginian Railway engineer, who was burned severely in a head-on collision between two freight trains at Wriston, W. Va., on February 24, died in an Oak Hill hospital Friday afternoon, it was learned yesterday.
Mr. Escue was one of the ten men injured when the two freight trains collided. It is understood that all other members of the crew injured are recovering satisfactorily.
Mr. Escue was a former Princeton resident. He moved to Page about three years ago.

Hop aboard the Sepia Saturday train to see the sights my blogging friends have shared.